HE-MAN AND THE MASTERS OF THE MULTIVERSE #1 (REVIEW)

He-man and the Masters of the Multiverse #1 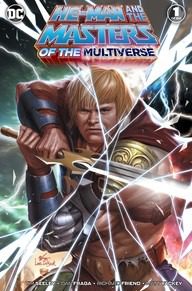 He-man and the Masters of the Multiverse is a strong first issue for a series that is poised to prime the depths of 27 years of He-man lore. By the end of this first issue, writer Tim Seeley has hopped between multiple versions of He-man, reintroduced never completed story elements, and dissolved character icons. Each of these actions weaves a complicated, narrative-heavy first issue that smashes the storytelling doors wide open.

Earlier in 2019, Tim Seeley wrote the Injustice v. Masters of the Universe limited series where he demonstrated an understanding of the characters and the world. After a series of DC, Thundercats, and Injustice crossovers, He-man is now able to stretch the lore of the universe and fold it back in on itself. The initial panels start in the expected confrontation between Skeletor and Castle Greyskull, but quickly shift with the arrival of a red shadowy version of He-man. This Anti He-man originated 25 years ago in a German mini-comic and Seeley’s deep cuts continue across the issue. This first issue demonstrates the usefulness of Dark Horse’s character encyclopedia as characters from the cartoons, comics, toy line, and movie are all intermingled.

Seeley’s taps into unresolved storylines from the 2002 animated series as he introduces Prince Keldor, the half brother of King Randor. This depiction of Keldor stems from the 2002 series and DC’s revival of the comic line in the early 2010s. Keldor in multiple universes eventually becomes Skeletor, but here Keldor is still a Gar adopted by the Royal Family and may be the key to stopping the Anti He-man from destroying the multiverse. All of this lore is well explained in the first issue, which creates an accessible narrative for He-man fans of any generation. Seeley’s writing does not assume readers have these characters and back story memorized and effectively sets up the larger conflict of the series.

Artist Dan Fraga’s work makes every He-man feel distinct. The opening version feels close to the standard He-man, but there are costume and facial differences that become noticeable as the issue goes on. From a movie version of He-man to a mobile tap game depiction, the art by Richard Friend and Matt Yackey captures the tone and setting of each characterization. The artistic team even matches the angles and lines of the early 1990’s comics for the space-based New Adventures cartoon.

All of this care creates an issue that is much more than simple fan service. He-man and the Master’s of the Multiverse is an invitation for any fan across generations to return to the characters they remember and an excellent launching point for a new story where anything can and does happen to characters and expectations.

He-Man and the Masters of the Universe