Hellboy and The BPRD: The Beast of Vargu #1 REVIEW 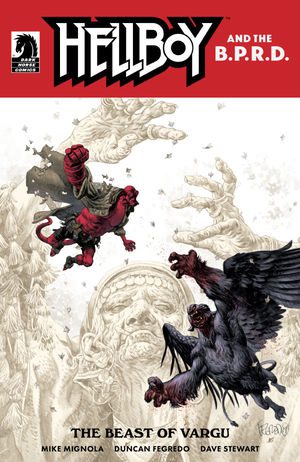 Hellboy and The B.P.R.D.: The Beast of Vargu #1
Dark Horse Comics

Hellboy and The BPRD: The Beast of Vargu #1 features two bizarre, short stories — the first is a little longer than the second. One thing Mike Mignola has always done well is to maintain the character’s relatability with his reactions. Take this one-shot story, for instance. Hellboy is able to accomplish what he sets out to do, but in such an unconventional manner that he can’t believe he actually did it. Truthfully, it’s still doesn’t make a ton of sense how he did what needed to be done. But that’s Hellboy.

Hellboy and The BPRD: The Beast of Vargu #1 also has a ton of action. We’re talking nearly 10 of the first 17 pages being pure grit fighting. And, of course, the B.P.R.D.’s top agent is just as prepared he ever is for any fight. Truly a vintage Hellboy fight.

As rattling as the ending was for the first story, the details about the villain of the issue that were added in made the conclusion great. It also served as a solid Segway into the second story — though that wasn’t all that gripping. An interesting story, for sure, but I want more Hellboy (or members of the BPRD) when I’m reading about Hellboy.