Never have I been granted access to preview a game, but here I am, and boy do I have some things to say about this game! At first I was frustrated, mainly due to the fact that - despite my increase in gaming as of late - I am still quite new to gaming. There are so many keyboard controls, that I have to write them down, and refer to them as I play… but that’s just me. I get so lost in the game, sometimes I forget what to press. With that said, it is not too difficult to memorize all the buttons needed. I’m just weird.

The major gripe I had with this game so far, is how sensitive the mouse is. The mouse controls the POV/ camera angle. One little move, and your whole POV is thrown off. This is detrimental when you are in the middle of battling foes, as it has caused my death many times. With time your hand gets accustomed to the mouse movements, but it still is too sensitive when it comes to battling.

Other than that, the game is really great! The graphics are so high, and the animations are so fluid that you need to make sure your computer can handle it (if you are playing it on the computer, that is). I have an OMEN gaming laptop, and the game made my fan run a little harder than normal. If that’s not a problem, then you can enjoy how amazing the atmosphere is without hearing your fan in the background (seems 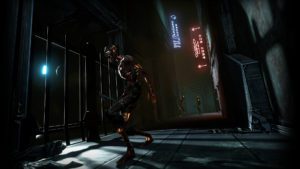 to be always my luck with laptops!). Every corner and room can lead to somewhere new, and to new story points, and… just… it’s never the same game twice! I’ve played the game at least ten times since getting it (may or may not include the amount of times I died), and I’ve discovered new things each and every time.

I don’t want to give much away, but according to the developer, if you have played gamed like Dark Souls in the past, this game should come fairly easy to you (which I haven’t, so… BIG learning curve for me!).

This game is worth the wait. Be sure to look out for it when it releases in April!