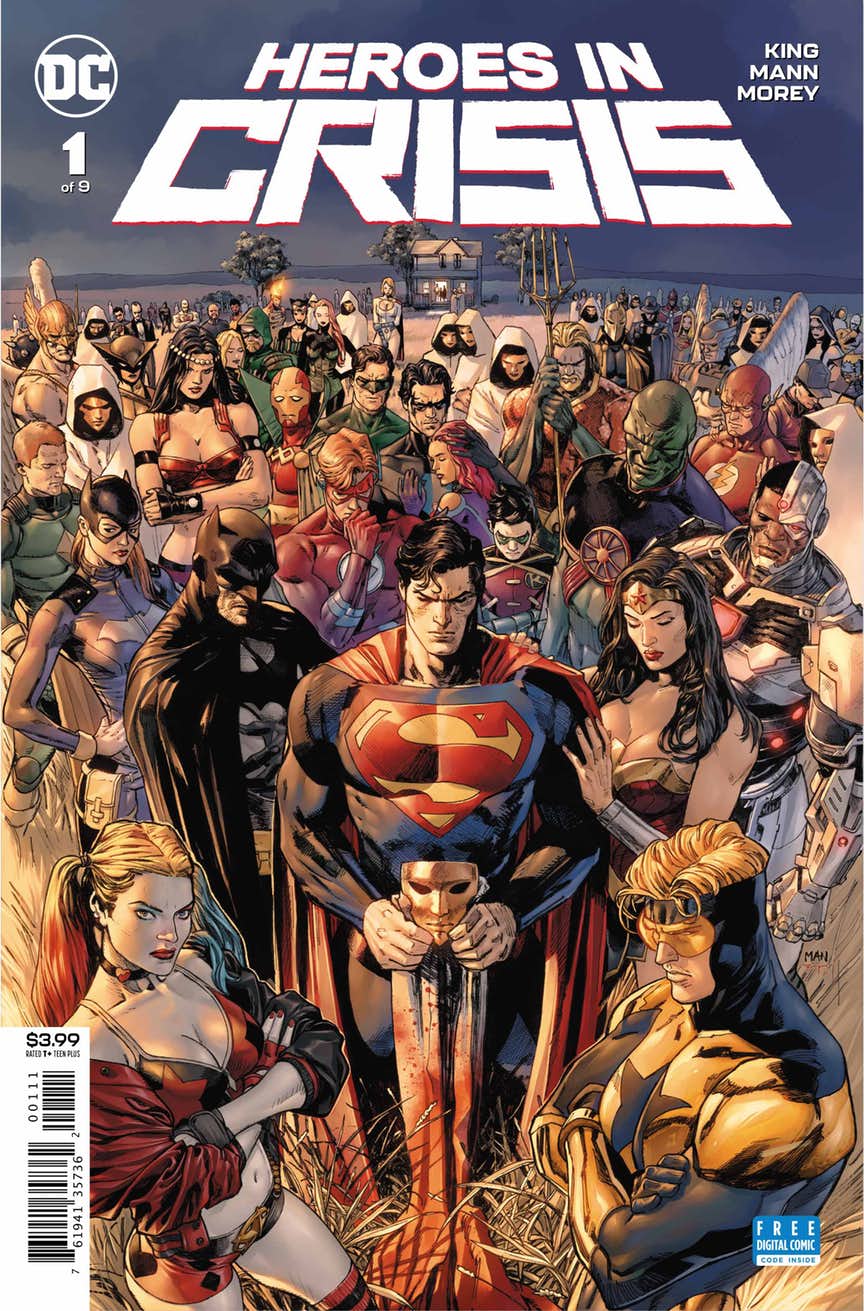 With an award-winning creative team and a heavy subject matter, Heroes in Crisis #1 arrives in comic shops everywhere carrying a weight of high expectations. For his part, Tom King insists that his ambitions for Heroes in Crisis #1 are simple: delivering a story that keeps readers interested. The first issue absolutely delivers this and, I think, goes a long way towards showing readers that this series is worth all the high expectations put on it.

The story centers around Sanctuary–a facility built by Batman, Superman, and Wonder Woman as a safe haven for heroes in the midst of crisis. It is a bastion of the cruel world and place to work out one’s trauma. It is also, as the name implies, designed to be the safest of spaces. This first issue reveals that this safe space has been violated. Someone attacks sanctuary leaving many murdered heroes in their wake and little clues as possible reasons for the attack. It is a jarring and dark premise that gives the issue a particular weight.

Structurally, the issue bounces between three separate threads. Each of the threads are evocative in their own right, but the most moving of the threads sees various heroes like Arsenal, Harley Quinn, and Booster Gold offering confessionals. These confessionals give us an insight into the particular fears and traumas that drove these heroes to Sanctuary. More than that, these confessionals are a chance for readers to see themselves and their own traumas reflected back at them. I frequently found myself tearing up as the pain expressed by these characters felt so real and true to the pain that so many of experience. Superheroes, it turns out, are people too.

King has mentioned before that he prefers to do his storytelling in boxes and that is again on display here. The confessionals are all comprised of the three-by-three panel grids that one might recognize from his Mister Miracle series. Elsewhere, the paneling switches to help convey the action—especially in the fight between Harley Quinn and Booster Gold. It is a testament to Clay Mann’s brilliant art that no panel feels wasted.

Speaking of Mann, the art does not shy away from brutality. The art is bloody and visceral and Mann juxtaposes this alongside mundane, country settings like a diner and a corn field. This juxtaposition helps give the feeling that something profound, almost sacred, has been violated and destroyed by this senseless act of violence. It is a brutal, urgent reminder of how violence destroys the lives and rituals that we have worked to establish.

Morey’s colors work well with Mann’s art in capturing the same mood. A brownfield is juxtaposed with heroes painted in vivid yellow, green, and red. The vibrancy of the heroes is then doubly juxtaposed against the grim, reddish-brown blood that marks the scene and their bodies as sites of violence. The art and colors are beautiful in their execution—and also unspeakably gruesome.

It would have been easy for this issue to read as too “on-the-nose” to truly tackle trauma and violence in a meaningful way. King’s insistence on telling a compelling whodunnit story allows for the heartfelt, overt discussion of trauma to feel meaningful and real. After finishing the issue, I found myself equally interested in finding out who is responsible for the violence as well as seeing how the various heroes work through trauma.

Heroes in Crisis #1 is an important story, it is a beautiful story, and it is a compelling story. I can’t wait to read what happens next.