During Gen Con, the greatest 4 days in gaming, there was a lot of time to roam the exhibit hall and see all the great new games that are out there to play. Like always, the big attention drawing tables were the miniature figure games. And the amazing scenes that really catch the passer-by’s eye are worth their effort. One such table took 2 employees 2 full weeks of working hours to complete, and it was outstanding. 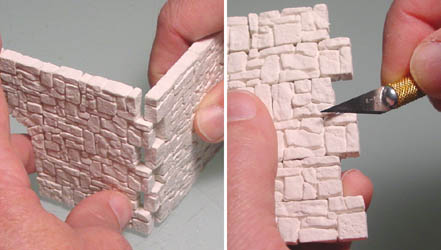 For the casual Dungeon Master or Game Master, a full 3D model of the dungeon or city your players will be adventuring in can be worth the awe. But is it worth the money? Some vendors offer laser cut wood pop outs where you build a scene of houses or fortresses. Those are great and all, but really have no creativity to what else you can create with them. They are what they were designed for and that’s it. Other vendors allow you to mix and match, create and build again and again like Dwarvenforge, who have options for you to buy by the pound at conventions or large quantities online. For reference, fourteen scale 10’x10’ sections are about a pound. For the same price, however, you have a third option from Hirst Arts Fantasy Architecture. You can buy a silicon mold that you pour plaster into and when it dries you have several sections and blocks to a design. Yes, this is more involved and not as immediate a building tool. But Bruce Hirst and his Castle Molds offer the hobbyists the ability to produce as many sections as they need as long as they put the time in.

For me as a Dungeon Master who loves to give my players some physical scenery or just a set piece, this is a thing of beauty. So I stopped by to talk with Bruce during the convention about his molds. 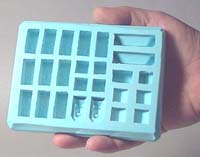 Geeks World Wide: How long have you been making these molds

Bruce Hirst: Castle Molds, the trademarked name for these molds, started in the year 2000 so almost 17 years ago. 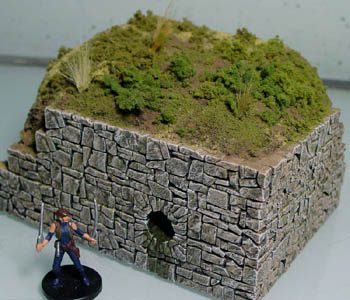 GWW: How did you come up with the idea to start making these molds, what was the motivation?

BH: Well it started with Gamesworkshop figures. I like to paint them and I wanted to find a way to display them. So I tried a number of things. I tried working with polymer clay and trying to make a whole wall section and paint it. I tried folding cardboard and printing out things. Eventually, I came up with the idea from a model railroad arch that came in plaster. I thought “If I made a mold of it, I could reproduce as many as I wanted.” So then it occurred to me, “Maybe I should just create blocks so I could build what I wanted.” And from there, just a lot of trial and error and practice. 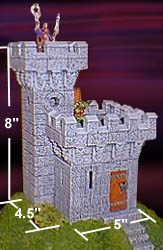 GWW: Do you remember which one you started with? Which mold?

BH: The very first one was the Wizards Tower #50, then I did some Gothic buildings and then some field-stone which is similar to the Dwarvenforge and then more Gothic and I can’t really remember.

GWW: How long does it take to do just one of these molds.

BH: It takes about 25 minutes. That’s for the plaster (of Paris) to harden. Now I prefer people use Dental Stone than the Plaster of Paris. Dental stone is 4 times stronger and it’s about the same cost. You can find dental stone on eBay. They send it to you in a postal package in about a 50lb box, usually more as they must just fill the box to its limit, not a set amount. 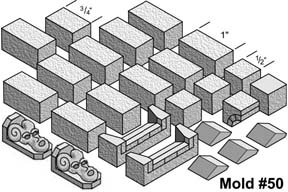 GWW: Did you do the painting of these sets all yourself? And how long would it take to fully paint one?

BH: I did. And to paint a set, like the Rubble Dice Tower (mold #263 is a 4”x4”x9” tower) took me only a couple hours to paint. Because basically, it takes longer to paint an inn table with plates bowls and cups than it would to paint this whole tower. I do a dark undercoat, using house paint, and then dry brush a lighter coat on top of that and then a lighter coat on top of that one.

GWW: You mentioned you painted figures and were looking for a way to display them, where you like into playing dungeons and dragons or even a game master trying to make layouts for your players?

BH: Actually, I’ve played the game some, but I just like the scenery. It was a hobby to display my models on

GWW: So you did this more as a hobbyist.

BH: Yes. Though I do like board games a lot. So, we haven’t done as much dungeons and dragons, but we have done Space Hulk, Wiz War, and Roborally. And I like to make things for games we play.

GWW: What mold is the most popular one people buy.

BH: Probably mold #70 (A Fieldstone Wall Mold excellent for dungeons and structures) and it is a basic mold, with lots of basic pieces that people can use for various of structures.

GWW: After you make one of these molds, say a small wall piece (the molds produce small sections that require several to make an actual length of and height for a wall) how do you attach them together, what type of glue do you use.

BH: I use Aleenes tacking glue. You can use Elmer’s wood glue, but Aleenes dries quicker and more flexible. 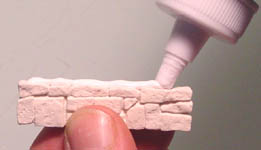 GWW: You have been doing this since around 2000, how have you enjoyed the process of it evolving to where it is now. Because you can build more and more, do you still get to do this as a hobby?

BH: Yeah, it’s worked out in the business where I try to produce 6 to 7 molds a year if possible. But it has to be molds I’m interested in. I get all kinds of suggestions about what people want and it’s more of a “Yes that’s a good idea, but my brain is more into this right now.” And unless my brain is into it, I can’t figure out the pieces to make it happen.

GWW: When you go to make these molds or when you’re planning out a building, do you have some kind of architecture program or process?

BH: All I use is graph paper and a pencil. 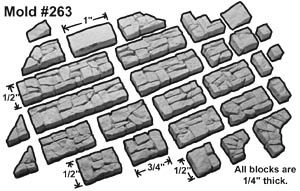 GWW: Oh wow, very old school. I love it. My background is in architecture and I have always loved making miniature models. These obviously aren’t to scale buildings, are there any other uses for them other than the hobbyists?

BH: There are some people in the art community that try to do some really creative and crazy things with them. But you know, gamers are my main interest. There are the model railroad people but they tend to be very picky about the scale of things but some are more loose and this works for them.

GWW: For someone interested in using your molds, what advice do you have.

BH: This is a huge craft project. Your mixing power and water, basically if you like to cook and spend time crafting. There a lot to do to make one of these sets and you have to put time in. Its messy, and some people just want the sets. So if your reasonably good with your hands, even if not, I’ve tried to make this as easy as it can be. All the blocks are in even increments and all you have to do is pour plaster into them, pop them out and paint them. All the measuring has been done for you, I tried to keep it from the medium to lower skill to build. Unless you’re taking on a big project like the Water Mill, then some more skill is required. 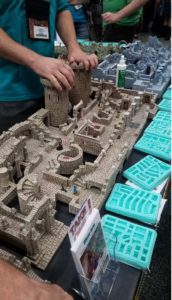