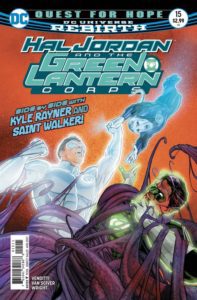 On Mogo, a meeting of both corps continue. John Stewart and Soranik have decided to match a Green Lantern with a Sinestro Corps member. Although Killowag has his misgivings, he agrees to the plan. All of the teams are paired in order to track down any rogue Yellow Lanterns in order to make them an offer: Join or Jail. When it gets to Guy’s turn, they find out that he’s left his ring behind and has stolen Space Cabbie’s ride.

Guy has decided to head to the planet Heep to get some answers. He’s after someone specific and he’s willing to give up his power in order to confront this person face to face. As he takes a seat, waiting for his quarry, everyone else wonders openly about his sanity. On a dying planet across the galaxy, Hal Jordan and Kyle Rayner are trying to assist Blue Lantern Saint Walker in his fight against an elemental who is determined to extinguish the last remnants of hope from the world. As the creature captures both Hal and Kyle, taunting Saint Walker with their torment to prove how hope can be taken away, The Blue Lantern gives the creature a lesson in how big a mistake it just made. 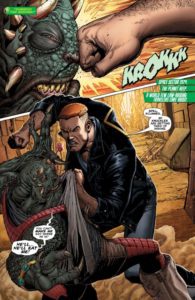 Have you seen this:
Nightwing #83 (Review)

Meanwhile, back on Heep, Guy Gardner is still waiting. He’s so confident that he won’t have to wait much longer that he even decides to take a nap. When he’s awoken from his sleep by Arkillo. Guy decides that this confrontation doesn’t require his ring and he gives the Yellow Lantern the option to fight him without rings, without powers and I’m pretty sure, without rules.

I continue to be impressed with the direction that this series is taking. Getting a view of John Stewart’s reluctance to be leader, but doing the job anyway, Hal’s sense of duty to the corps being challenged by his own reckless showboating, Guy being Guy and the tentative drama that is elicited from trying to meld both of these corps together is no small feat. Robert Venditti seems to be having fun writing for these characters and he has found a good way of giving many of them the emotional arcs that they need without sacrificing the overall story of the other characters. Ethan Van Sciver’s art is always impressive as he deftly showcases the power and majesty of these characters. Anxious to see what direction the story goes in next.