Dive into a Ronin’s Tale of Sex, Swords, and Sake! 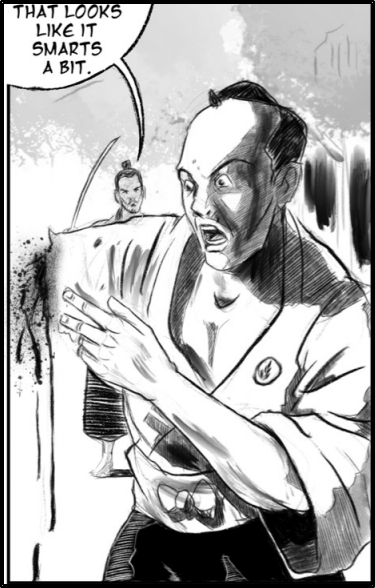 Honorable reader! Sheathe your katana and prepare to go back in time with Hush– the wise-cracking Samurai w/ a Sword– living day by day in a feudal world of wonder. Drawn in black and white, the book is really giving me the feeling of a classic samurai movie with dialogue actually written for this century. Many times in film, the samurai genre went for black and white in order to mute excessive blood and violence for audiences. In Hush Ronin, the black and white is here, but the mute button on violence is OFF; sex, swords, and sake are ever-present on each action-filled page.

The protagonist, Hush, is a wandering ronin, stealing horses to feed his drinking habit and pleasing lonely wives of lords. What he lacks in coin, he makes up for in puns and unrivaled swordplay skills, not to mention his lack of ability to give a fuck about much of anything. Reading, I got the feeling that if Deadpool traveled back in time to be a Ronin, you’d get something like this book. In a good way!

Hush finds himself in a lot of trouble after he steals a horse from a samurai by the name of Roku, along with intimate time with the warrior’s wife. Roku killed the wife off-page without a second thought, but dammit, he really loved that horse. Something tells me Roku is going to commit a string of major party fouls on Hush’s good times before this volume ends.

Pictured: Evidence of Roku Streaming Centuries Before the Internet!

A ronin with a tongue sharper than his blade, who steals horses for Sake and beds the wives of lonely feudal lords. What else could you ask for in this teen + rated release from Schiek through Ashcan Comics Pub? The black and white pen and ink emphasize a world of shades of gray, as the protagonist kills, steals, and swindles. Regardless, I found myself rooting for Hush as he tries to navigate a society with no signs of a middle class and the constant threat of crucifixion around every trail. I found a bit of a later, supernatural, sequence confusing, maybe overly black in a few panels. This does seem intentional; however, it left me scratching my head as to what was happening.

All in all, if you’re into adult comics, action, and feudal Japan artwork that’s second to none, pick up this book right away!