I Didn’t Choose the Slug Life: A Guide to Abathur

Abathur, The Evolution Master, is a character as unique as he is difficult. Unlike other characters in Heroes Of The Storm he does not engage in battle directly, and instead influences the battle by enhancing other heroes, laying traps, and even cloning other Heroes. Abathur’s strength comes from his ability to subtly control a battle and be an experience soaking monster, rivaled only by The Lost Vikings.

His weakness comes from the fact that if you are not playing him to his utmost potential, your team can often feel like they are a man down the entire game, and seemingly playing catch up from level 1. On the upside, if you are using the Pajamathur skin, none of that will matter because of how adorable it is. The best way to explain how truly unique Abathur is, will be to see exactly what is in his kit. Let’s start with his trait. It is called Locust Swarm, and every 15 seconds you will spawn a locust from your location that will travel down the nearest lane and attack minions and structures in that lane, these locusts last 25 seconds. These locusts can soak experience as well, but only on minions that they deal the final damage to, or “Last Hit.” 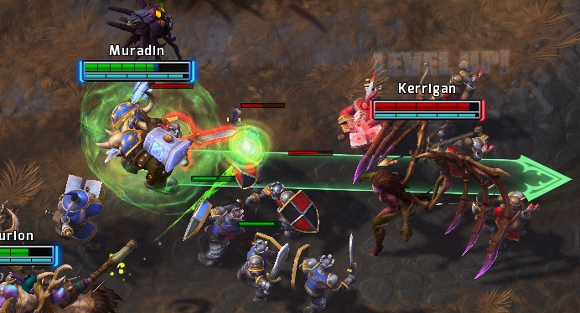 W: Toxic Nest - 10 second cooldown - Spawn a mine that becomes active after a short time. Deals 51 (+15 per level) damage and reveals the first enemy to step on it for 4 seconds. Lasts 90 seconds.

R2: Evolve Monstrosity - 90 second cooldown - Turn an allied Minion or Locust into a Monstrosity. When enemy minions or captured mercenaries near the Monstrosity die it gains 5% Health and Basic Attack damage, stacking up to 30 times. The Monstrosity takes 50% less damage from Minions and Structures. Using Symbiote on the Monstrosity allows you to Control it, in addition to the normal Symbiote abilities.

Now, before we get into builds, a small disclaimer, Abathur requires no small bit of support from your team composition, as well as knowing what will be effective against the opposing team, as well as the map you are playing on. In other words, if you’re playing Quick Match, There isn’t going to be one easy answer to “What build should I use?” Conversely, Abathur gets a lot of hate in Hero League. At the time of writing, he has the lowest win rate of all heroes as per Hotslogs, a measly 41.8%. I believe however that Abathur is unfairly maligned, and much of his small win percent comes from people underestimating just how hard he is to play. In this guide I’ll go over two of my preferred builds, one that focuses around the Symbiote or “Hat” in combination with a strong melee assassin, and one build that focuses on split pushing, that is less dependant on team composition, and may be slightly easier to use in quick match if you find yourself in a less than ideal team make up.

Build #1: This is My People Killing Hat.

Level 1: Pressurized Glands - Increases the range of Symbiote’s Spike Burst by 25% and decreases the cooldown by 1 second. Typically with this build you’ll be partnering with a particularly sticky melee assassin, such as Illidan, or the Butcher, and trying to add to their significant damage in any way possible. If for some reason you are running with a less than ideal healing set up (Solo Tassadar, etc.) Regenerative Microbes is also a viable pick.

Level 4: Adrenal Overload - The Symbiote host gains 25% increased attack speed. This is pretty much the talent that makes this build. When applied to a skilled Illidan player it heals 25% more from his auto attacks, and 25% additional reduction to his abilities. When used on Butcher he heals more from mark and can simply melt any hero past level 16. It even works on alternate ranged targets such as Raynor or Valla.

Have you seen this:
Othercide Launches Today on PC, PlayStation®4 & Xbox One!

Level 7: Needlespine - Increase the damage and range of Symbiote’s Stab by 20%. As with our level 1 selection, any way that we can add to the damage of our Symbiote target is going to be the best way to go. Alternatively, if the opposing team has a particularly strong pushing composition on a map like Dragon Shire, M.U.L.E. is a tried and true classic.

Level 10: Ultimate Evolution. While our buffs are great, having a straight up second copy of our melee Assassin target, or even another important member of the team is fantastic. Double Butcher or Double Illidan will absolutely destroy even the highest health pool enemy heroes. This has the added benefit of evening out teamfights in the late game, as your team will no longer have to deal with 4v5 engagements.

Level 13: Soma Tranference - Symbiote’s Spike Burst heals the host for 20 (+6 per level) health per enemy hero hit. Give that your symbiote target is going to be in the middle of any and all team fights getting that extra healing

Level 16: Adrenaline Boost - Symbiote’s Carapace increases the movement speed of the host by 40% for 3 seconds. Pretty self explanatory, giving the shield a speed boost allows it to be deployed more strategically, when needed, which is useful given its lengthy cooldown.

Level 20: Hivemind - Symbiote creates an additional symbiote on a nearby allied Hero. This symbiote mimics the commands of the first. In a big team fight, provided you’ve buffed the damage of the symbiote significantly, this can essentially add another body to a teamfight with the damage you’ll be putting out.

Now for our second Build: Level 1: Survival Instincts – Increases Locust’s Health by 50% and duration by 40%. With this build most of our effectiveness is going to come from split pushing during times when your team is engaged at a map objective, maintaining a strong experience lead. Buffing locusts is a great way to do this, as it requires little dedication on your part. As with the above, Regenerative Microbes isn’t a bad choice either if your healer situation is not great.

Level 4: Prolific Dispersal - Reduces the cooldown of Toxic Nest by 2 seconds, and adds 2 additional charges. This talent tier doesn’t have an obvious choice to enhance split pushing, but Abathur’s mines are probably his most overlooked ability. They are also the one that requires the most attention and awareness. If you don’t feel comfortable with your mine placement, take sustained carapace instead.

Level 7: Vile Nest - Toxic Nests slow enemy movement speed by 50% for 4 seconds. As above, the nests are extremely helpful, however if you do not find value in them personally, M.U.L.E. is always a solid choice, and if you picked sustained carapace at the previous tier, then network carapace can give your minion waves a significant advantage over enemy minions in uncontested lanes.

Level 10: Evolve Monstrosity - Best case scenario; The enemy team essentially ignores the monstrosity and allows it to gather 30 stacks by killing minions, and it can push a lane extremely effectively. While this isn’t likely, it’s great while it happens. Otherwise, you can control the monstrosity with your Symbiote, and try and keep it safe as best you can. The best time to leave the monstrosity unwatched it during big objective fights; Tributes, Towers, Shrines, Immortal Fights, etc.

Level 13: Bombard Strain - Locust’s Basic Attacks become a long range siege attack that deal 66.667% additional damage. Another self explanatory ability, a straight up buff to your locusts, allowing them to more effectively soak a lane, and with the next few talent tiers, that will become very important for sustaining your experience lead in the late game.

Level 16: Locust Brood - Activate to spawn 3 Locusts at a nearby location (45 second cooldown). This is a talent best used on cooldown, to spawn additional locusts at lanes where you have a significant minion advantage. Coupled with their additional damage and duration of this build, your locusts quickly become a force to be reckoned with.

Have you seen this:
5 Easy Ways To Make 'Man of Steel' The Perfect Film

Level 20: Locust Nest - Activate a nest that periodically spawns Locusts. Only one Nest can be active at a time. This is essentially a second body for you, in that it spawns locusts, just like you do as Abathur. This obviously helps soak multiple lanes, but also works as a great bluff. In the late game, enemies will be looking for locusts coming from bushes, and may spend time hunting you, only to find a nest. 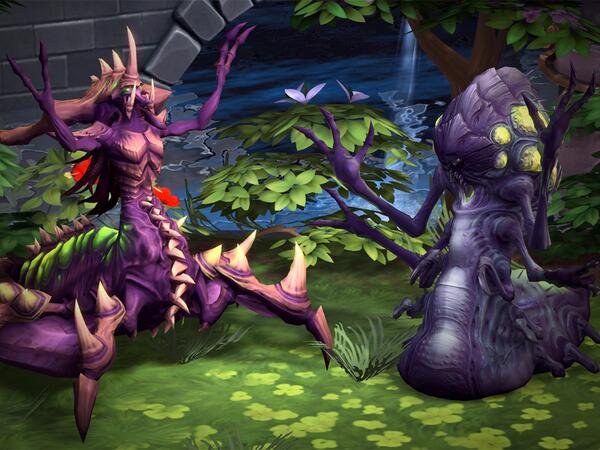 General Tips for Playing With Abathur: She lookin’ for a Slug from around the way.

That’s what I’ve got for Abathur, I love him, and he certainly hopes that you might too!

Abathur Blizzard esports heroes of the storm moba pc starcraft
Are you an Insider?News, reviews, & updates are just the beginning.