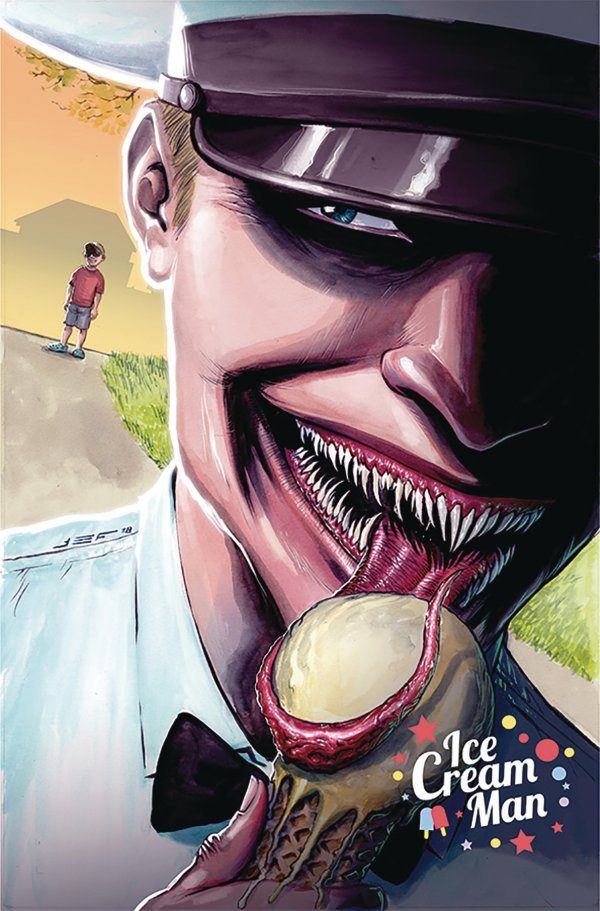 We have a new issue of Ice Cream Man and this time it’s a tragic love story set in Mexico. Juan is in love with Maria but she’s set up to have a life with another man known as the General. He’s quickly shown to be a terrible and vile man who really doesn’t care much for others well being and the story builds up well enough to the eventual confrontation with all three of them. However, I found a small annoyance with how the scenario plays out which in turn causes the ending to happen the way it does. I have no problems with the ending though but I felt as it could’ve been brought in a better way. I won’t go far into what exactly happens because I would much prefer you all to read it and judge the scene on how it goes on your own. I also want to bring up how I absolutely love how this issue starts off. I initially thought something was wrong with my eyes until I realized everyone was speaking in Spanish. I may not speak or read the language but having it start like this with no translation on the page was quite enjoyable because, through the way the characters are drawn, their faces convey the emotions they are all having so you still have a pretty clear idea of what is going on.

I think this may be one of my favorite issues when it comes to the art because there was a lot opportunity to play with the colors and design given the setting the story takes place in. With the makeup that Maria wears to the sunrise in the backgrounds, it just paints that the area can look quite beautiful while also showing the real monster his true colors. The letterer also did a really great job here with this monologue that goes on as you read the story. I always find that these can be difficult to do because there’s always a chance it can interrupt the flow of a story when you have characters in the panels also having a discussion but this pushes the narrative of the story so well and is definitely one of the better parts of the issue.

The story is still very simple and for as much as I enjoyed it, there’s still that one scenario that I wish played out better. This is also by far the least weird issue of the series but fans will still find a lot to enjoy and new readers should still give this a go to find interest in grabbing early issues in trade.