Developed by Under the Bridge, Illusoria is an action platformer that requires patience and skill as you traverse a beautiful and dangerous 2D world. The controls are simple: move, grab/use, jump and fire. It’s not a complicated game to play, but certainly feels like a throwback to classic NES titles that demanded timely jumps and relied upon the player knowing what to expect (having died trying many times). I’m enamored by Illusoria’s sounds and design. I’m playing it in 1080p on maximum settings - it’s not a demanding game and you could probably enjoy it on an ultrabook. And aside from one snag in a couple hours of playtime, I didn’t experience any bugs or issues. At $9.99 on Steam - it’s a steal of a deal. 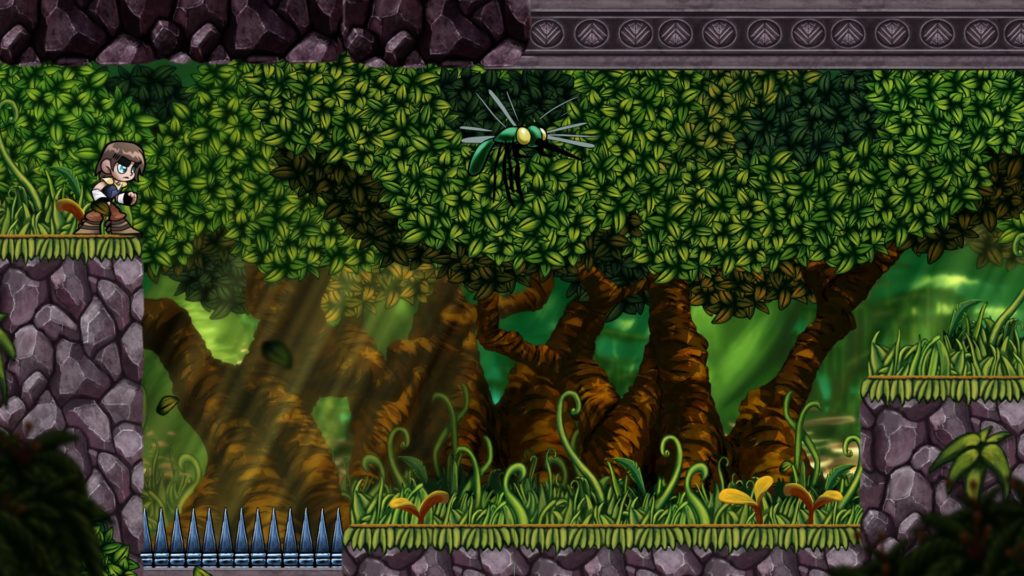 Mosquitoes can kill you instantly. So can those spikes. Always be aware of your surroundings.

The story of Illusoria centers around a prophecy that has been fulfilled, leading to the return of the Puppet Master - the world corrupter. He turns living beings into abominations that attack and kill everything while he gains power. You play as the Keeper of the Flame and must protect the kingdom and Empress Amelia from the Puppet Master. Your goal is to acquire the power of the Guardian and defeat the monsters and the Puppet Master. It’s exactly the story I like in a game like Illusoria. I’d rather focus on the gameplay than the story. In Illusoria, you need your focus. In the early game they ease you into environments where there is 1 way to die. But, eventually, you’ll stumble upon multiple ways to die as you negotiate your next vault, sprint or climb.

He’s actually so much more…

Using the keyboard setup, it’s easy to overshoot a platform or miss-time your jump. The monsters do not come at you fast so, for what the devs are trying to accomplish, the game is pretty fair. There is a moment in the first chapter of the game where you have to Indiana Jones your way out of a collapsing church. It’s tense! I did miss a collectible along the way and I have no idea how someone could grab it without failing. In fact, I think that’s the point - you need to grab it, fail, and then use your next life to complete the escape. In the 2nd chapter you meet one of Illusoria’s great astronomers, Michael. Well, he’s more than that. Anyway, Michael and his brother ask you repair a lens for their telescope, and, away you go. This is how the game’s story is delivered - via written dialogue. You’re given direction by NPCs, but the levels are not entirely linear. If you manage to find a map you’ll be given some insight into the world around you. Exploration, however, is not really what Illusoria is about; it’s a pure platformer.

My brief time with Illusoria has been positive. It’s a great bargain price, particularly for those that love platforming or want a more bite-sized game to get them by between larger titles.

Our thanks to Novy Unlimited for providing a review key.

illusoria indie games pc games Steam under the bridge
Add your voice!Join the conversation on Discord...
Join Our Discord