In 2015, Metroid Prime 4’s Producer Gave a Possible Hint at the Game’s Story

So Federation Force wasn’t for nothing…

Yesterday during Nintendo’s twenty-five minute E3 Spotlight, the publisher unveiled a Metroid Prime 4 logo, signaling a new installment in the beloved Metroid franchise. And we lost our minds. With nothing but a logo to go on, there are very few details that tell us what this game is about, other than it being another Prime first person adventure.

However, back in 2016 Nintendo released the 3DS title Metroid Prime: Federation Force, a spinoff of the main series where the player assumes the role of a Galactic Federation Marine. A couple months after it’s E3 2015 announcement, Kesuke Tenabe - the producer of Federation Force, all 3 Prime games, and the eventual Prime 4 - hinted at how Federation Force would fit within the Prime series and how that would influence future games in the series.

In an interview with UsGamer, Tenabe had the following exchange:

USG: You mentioned the story leading up to the future. Is that the “future” as defined in Metroid Prime 3, or are you thinking ahead to future games in the Prime Series?

KT: The whole story around Dark Samus and Phazon are complete stories. But for the future, what I have in mind is something involving Sylux and Samus with the Federation Force, so to put a focus on that. While I still don’t have a concrete idea on how many games that could be involving between these two, there’s something relating to Sylux that has made Sylux hate Samus. So in that way, it might be backtracking a bit in the timeline to explain that a little bit, to clarify what is going to happen between the two of them.

USG: So in a way, you envision this game as a Prologue to future chapters in the Prime Series?

KT: You can say it that way, but obviously, you will be able to learn something about the Prime Universe with this game. I am definitely creating this game with it in mind that players can enjoy it as much as they did previous Prime titles. With that in mind, I would love players to experience this as well. 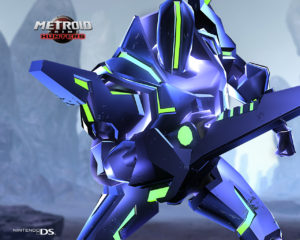 The bounty hunter Sylux first showed up in Metroid Prime Hunters, and very little is known about the character other than that he has a strong hatred for Metroid series protagonist Samus Aran and the Federation Force.

In the special ending of Metroid Prime 3, players can see Sylux’s spacecraft covertly following Samus’s ship. Furthermore, in the ending of Federation Force, an individual with armor remarkably similar Sylux’s is seen breaking into a Federation facility. The mysterious character then hacks a stasis tube containing a Metroid Egg, causing it to hatch. The camera then zooms out to show the individual has a shoulder spike resembling that of Sylux.

As of right now, it seems that Tenabe’s interview responses are confirmed in the increased presence of Sylux. From his comments, it sounds like Metroid Prime 4 will pit Samus against Sylux while also exploring the background between these two bounty hounters and why there is apparently so much hatred on the behalf of Sylux toward Samus. What happened between these two characters and what will happen when tensions finally culminate in a confrontation between them?

Of course, this is all speculation based on occurrences in the Metroid Prime series timeline and Tenabe’s comments. In the meantime, let’s just be happy a Metroid Prime 4 exists. It might also be wise to not trust anybody whose “uncle works for Nintendo.”

What would you like to see from the fourth installment of the Metroid Prime series? Tell us your thoughts in the comments below!