Hellboy was revealed with the second character pack of Injustice 2 and he was definitely a big surprise as a guest character for the game. Now we finally get to see what his full arsenal will be for players to use. First off, the animation for this model is absolutely fantastic. Where a majority of the roster definitely has a more realistic vibe to their design and looks. Hellboy looks like he is being animated straight out of the comics. You really get that vibe from him when you see his facial animations during the characters interaction before the fight starts. He is definitely coming off a bit more as a heavy type character with some moves that remind me of Solomon Grundy’s moves from the last game. 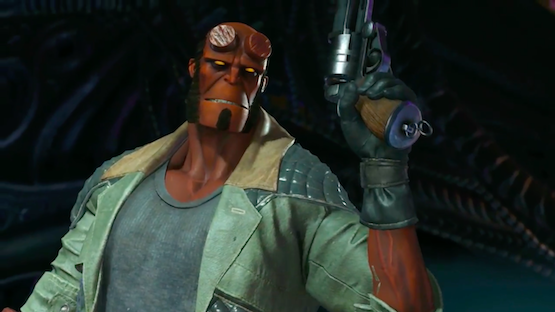 We also get a glimpse at his ability trait, which seems to put a shield around him so he can take hits and not have a combo interrupted. He, of course, has his signature gun, which seems to be used only when needed for zoning so you can try and close the gap on opponents that depend on distance more often. Meter burns also seem to be helpful in these situations for large jumps into a grapple, extra damage on gunshots, and to continue into a combo off of juggles. We end with seeing his super, which are always fun to see as Hellboy drags his opponent to hell to beat their face in. He probably has one of my favorite character win animations as he punches a couple of demons while rocking his horns and crown. Heavy type characters are not my typical choice in fighting games whether it’s Street Fighter, Skullgirls, or BlazBlue. Injustice, however, seems to always make these types of characters a bit more fun to play with and I am very much looking forward to playing as Hellboy in Injustice 2 on November 14th!

fighting games Hellboy Injustice Injustice 2 netherrealm
Are you an Insider?News, reviews, & updates are just the beginning.