To celebrate the release of the new horror hit American Mummy on DVD and Blu-ray I was fortunate enough to receive an interview with the Director Charles Pinion. 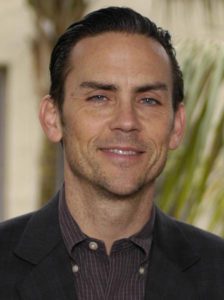 Pinion is a visual artist and director who made the punk rock skateboard zombie movie Twisted Issues (1988), the post-Cinema of Transgression witches in the snow movie Red Spirit Lake (1992), and the gritty San Francisco cannibal movie We Await (1996). American Mummy is designed to be the first instalment in a new franchise. 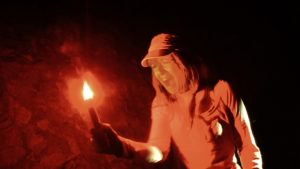 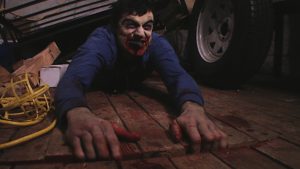 American Mummy is about a graduate student on an archaeological dig in a desert who performs a ritual on a mummy wearing a fearsome mask, awakening the blood-hungry spirit of Tezcalipoca, Lord of the Smoking Mirror.

I am a big fan of the Mummy genre whether it be the 1932 vintage film starring Boris Karloff, or the 2003 cult classic Bubba Ho-Tep.  What I found refreshing in this film is that it does not involve an Egyptian God. Here is my exclusive interview with Charles Pinion where I even ask him to compare his movie to the big budget film out now in theaters starring Tom Cruise.

GWW: Your name is most linked with horror.  Was it always the plan to be a ‘horror guy’ or did it just happen?

Charles: I’m not sure how much planning has been involved with my life. I sort of careened from painter and printmaker to writer to punk rock frontman to finally filmmaker.I’ve felt a connection to psychotronic films more than with horror per se. I like my movies to have obscure spirituality, absurd perspectives, sexuality, gore and humor.

GWW: What was the first thing you put on film?

Charles: At a certain point in my childhood I became the family documentarian. The first thing I put to film, in around 8th grade, was someone demonstrating Kendo (a form of sword-fighting) when I was a military brat living in Japan. First lesson I learned: hold the camera steady. Other lessons followed, such as not to hold the camera on its side, since it will be projected horizontally. Oops! Such are the brutal lessons of youth. Over the years I shot hours and hours of family Super-8 footage, until I got my first VHS camera and started shooting bands. This led to me making my first “real” movie, the skateboard zombie movie Twisted Issues.

GWW: How do you think you’ve grown as a filmmaker since then?

Charles: I’m interested in telling stories with images and sound. That never changes. A big part of making movies happen (particularly independent movies) is logistics. I would say that over time I’ve gotten better with logistics. Can we make this shot happen in this amount of time? If not, do we go with a different shot, or do we persist, perhaps futilely, to fulfill our original vision? That quandary is filmmaking in a nutshell.

GWW: Where does ‘American Mummy’ rank in terms of favorite film experiences?

Charles: I love my movies like my children and each one is a favorite in its own right. I loved making American Mummy. The location was in a remote area of the desert, which felt magical to me. While most cast and crew went back every night to a motel in the nearest town, I slept on set amongst the tents and the tumbleweeds. I had some great solitary moments in that beautiful and forbidding Nature. Every time I see the movie, I am happily taken back to that place.

GWW: It’s quite an accomplishment – especially considering the budget.

Charles: Thank you. Everybody worked hard, pulled long hours and kept the energy up. It was a team effort for sure.

GWW: Any hiccups with it though?

Charles: Oh, goodness yes. We shot in 3D so that set up a lot of challenges in terms of matching cameras and staying on schedule. Time, as with most movies, was always scarce. The sun started going behind the hills at 4 pm. We shot in a remote area of the desert and that set up challenges as well, since cars and trucks got stuck in the sand coming and going. At one point the rescue truck got stuck rescuing a smaller truck. The wind could be merciless. Our entire set blew down one night. Our balloon light floated off into the deep landscape, never to be seen again.

GWW: Was it originally intended to be part of a trilogy or was that something I dreamt?

Charles: You have great dreams! Yes, it was always intended as a trilogy. Tezcatlipoca, Lord of the Smoking Mirror, has plans for his future, which require a lot of blood.

GWW: I see I have time for one more question. Have you seen the Tom Cruise ‘Mummy’ yet? How does it compare to ‘American Mummy’ in your opinion? Two different breeds of the same being?

Charles: I have only seen the trailer for Tom Cruise’s Mummy, but my assumption is that they are not very similar. My collaborator and I wrote American Mummy in 2004 with the intention of making it in 2006 as a shot-on-video run-and-gun gorefest. With the success of Avatar, American Mummy was reborn as a 3D film, and as a result required a bit more of a controlled approach to its production. Since ours is a Mesoamerican mummy, we always knew it was different than a traditional mummy from Egypt. However, somewhat later I learned of the large sub-genre of ‘50s Mexican cinema devoted to The Aztec Mummy, with great titles like The Aztec Mummy Vs. the Humanoid Robot.

Hope you enjoyed the interview here is the trailer for American Mummy!