I got to sit down and talk to author and illustrator of the graphic novel, Braun.  Find out what inspired this Louisiana born comic book fan. 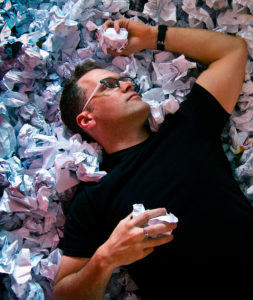 Geeks WorldWide: What was the first comic you read?

Shane White: I’m not sure I’d use the word ‘read’. I’d had a small box of comics with the covers torn off and I’d look at them when I was very young. Even though it didn’t have a cover I did find the exact comic that it was…Captain America #117. There were other books like Charlton Comics Hot Rod #85 “The Last of the Road Knights” and a Little Lulu.

GWW: When did you start creating your own?

SW: Early on I was drawing Spiderman and all that, but I didn’t start in earnest until I was 12. With the same earnestness a 12 year-old can muster. Yet…I did not stop. I took up self-publishing mini-comics when I was 15.

GWW: Who or what inspired you then and now?

SW: Printing. For whatever reason I like printing and the smell of ink, the collection of work and the choice of paper stocks. It’s still one of the things that excites me about books. Technically, I don’t care to do the actual printing but I do like to know as much as I can about the process. Once I know how to get the work printed…the sky is the limit. I really like knowing that there is very little in the way of me getting my ideas and work out there.

GWW: Is there a person or style you try to emulate?

SW: For study purposes, sure, I’ll play around drawing like Dean Cornwell or Peter Hawley or some other artist. I do it to work out some of the things that I really like about their work and hope to incorporate in mine. But in most cases nothing really sticks or is definable as being someone else. It helps broaden the language of art for me and in doing so I can call down lightning when it’s needed…whatever the hell that means. I work in a style that best suits the story I want to tell. If that requires learning how to draw in a new style then that’s what I do. It works well for me if I’m also writing the work, but it doesn’t do me any favors when it comes to connecting with editors.

GWW: What kind of story do you like to tell?

SW: Good stories. Unexpected stories. I read a lot and listen to a lot of audiobooks while freelancing or doing some other form of artwork. I write every morning whether it’s on a project or on my craft. While I enjoy writing certain genres, like sci-fi, I’m not a fan of reading/listening to too many.

I finished writing my first novel a few months ago, and it’s a awkward beast, more literary than genre. About growing up in poverty and struggling with basic life skills as a young teen who is about to be thrown into the maw of life. Now I’m working on a kind of Victorian sci-fi story. Part horror, not really steampunk but more about character and class warfare. With every new project it’s important for me to try something new, whether it’s the process of building the story and/or actual writing voice. Does that make sense?

GWW: What would you tell our readers about your work, Braun? 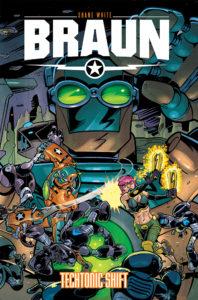 SW: It’s an action-adventure story about a 20-something girl, Maven and Braun, her highly-advanced robot guardian. In the world of Decca City, governing corporations called Politicorps are constantly battling to win votes using the latest and greatest populist tech for the teeming masses. To get their hands on competitor tech, Axiom Global take over Mobile Strike Services, the robot reclamation facility where Maven and Braun work as wreckers.

Braun is flagged as an “employee of interest” because of his mysterious internal parts signatures. Axiom learns that Braun may be part of a secret project that evaded their grasp 20 years ago, and Braun and Maven go on the run.

In the fight for survival, Maven finds out the truth about Axiom, her missing parents… and a darker secret that changes humankind forever.

GWW: What inspired this story?

SW: Lots of things. Humankind’s quest for perfection, habitual information-seeking, misplaced faith and people with power who do the thinking for us. I also really love robots and mid-century industrial design. I wanted to take all these things and create a world where the future was just as it was predicted some 65 years ago but with our current social downward spiral. It’s a colorful if somewhat mild dystopian future.

Everyone is such a believer in technology that if the future doesn’t look bright now…just a wait a minute and it will.

GWW: I notice a touch of the ancient and futuristic in your graphic novel, which do you gravitate towards more?

SW: I like to study the social trends around behavior and technology. I guess I’m more of an armchair futurist. Still, there are many things that have gone before that have value in shaping the future. Weather events, religions, wars and the like are great touchstones that serve as predictors of human behavior. It all serves a function of storytelling that I find fascinating.

I’m more apt to study the past, in order to create the future. And by the ‘past’ I’m also including 30 seconds ago. 🙂

For this story I think there is a universal struggle about belief systems and while I don’t align myself with anything beyond science I think it’s a good counterbalance to the thrust of this story.

GWW: Is it possible we’ll see more stories explored within this universe?

SW: If it is I’m not sure exactly how that would come about. I have an idea if there was to ever be another graphic novel but the circumstances surrounding that would need to be considerably different. Meaning, I’d have to be able to make a living from it in order to see it through.

GWW: Are we ever going to see a Braun animated series or film?

After reading Braun, I was saddened by Mr. White’s final answer.  I believe that is a comic that needs to be brought to the screen.

Find out more about Shane White and how to purchase his creations at: http://www.shanewhite.com/