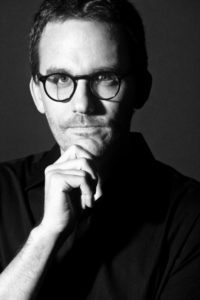 Kurt Oldman, the talented composer of Sony Crackle’s stop motion animated series SuperMansion sat down to answer some questions about his fandom with the GWW. The newest installment of the series, SuperMansion Summer Vacation Special is available to stream for free on August 16th.

SuperMansion is based on Superheroes. Are you a comic book fan? If so what characters?

When I was about six my neighbor dropped off a large stack of comic books. I remember there were a lot of  X-Men and Fantastic Four amongst them, along with some more obscure ones like Animal Man, Flaming Carrot and a lot of weird European one-offs. My favorites where the X-Men books until I fell into Hellblazer in the late 80’s which remains my favorite to this day. The supernatural aspects and mythology of these books probably explain why I became a horror super freak. I also loved the rather complex antihero nature of Constantine, anything but straight forward.

Given the chance, what super power would you like to have? Would you be a hero or a villain?

If I had a superpower it would be to suspend gravity every so often. I drop so much stuff during the day, from scores to guitar picks. It really gets to me sometimes. I would be a villain for sure, just so much more interesting to me.

It’s been noted the score from E.T. influenced you as a child. What moves the nostalgia meter for you? Do you collect anything as a result?

My nostalgia meter was way up when Stranger Things Season One came to Netflix. It really incorporated all the themes of films I grew up with in a wonderful way. Not a single song that doesn’t bring back some distant, long forgotten memory. And of course it brought back some of the magic we felt when we were sitting in a darkened movie theater as kids. I hadn’t felt that for a long time.
I’m making a concerted effort not to collect too many things these days. I try to keep my life and workspace as uncluttered as possible. Having said that, I keep buying back a lot of my old vinyl. Pink Floyd, Peter Gabriel, Genesis all the stuff that influenced me growing up. I just spent way too much on a Russian pressing of The Wall.

Let’s think of a world where Kurt Oldman didn’t end up working in music. Could you imagine doing something else? Any other interests?

I studied Photography in College and had some of my pictures published in a German magazine but I always loved film and film making. I made a couple student films throughout High School and College. I think if anything, I may have continued on the directing side of film making. At this moment in my life though I’m not able to imagine myself doing anything else. I think I would spontaneously combust if I wasn’t able to translate emotions into music.

Normally people ask for advice on how to break in to the medium but is there a moment from the beginning of your career you’d be willing to go back in time and smack yourself over?

Oh absolutely, to be honest I would be so busy going back in time to smack myself, I’d need my own DeLorean. When I first started out I used to focus way too much on individual moments instead of the bigger overarching architecture of the film score. These days I like to say, “You score a film – not a scene”. That may sound a bit nebulous, but think about it. More than anything else I would love to tell my past self to just be fearless.

The heavens open up and you can pick your dream project. What would it be?

I’m interested in good storytelling and great characters no matter what the genre is. When you get both of those together it really becomes a dream project where you can do some of your best work as a composer. Working with the right team who is conscious enough of what you bring to the table is equally as important.

What do you like to listen to during your downtime. Who are your favorite artists?

During my downtime, I always seem to listen to what is the furthest thing removed from what I’m working on right now. My current playlist contains the Blood album from In This Moment, the bands Hollywood Undead, The Pretty Reckless and a song called Number One by Chaz Jankel from the film Real Genius – Nostalgia meter way up on that last one…
Thanks to the Shazam app on my phone, I’m discovering a lot of great artists all the time now. Even so, I keep going back to what influenced me the most growing up: Pink Floyd and Peter Gabriel. I also started listening to a lot of  Mahler Symphonies again the last couple months.

Kurt, thank you so much for taking the time and answering my questions.

You can learn more about Kurt Oldman and hear his music by visiting kurtoldman.com