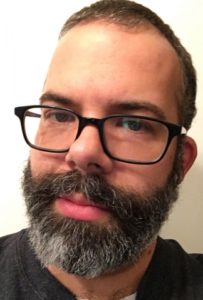 I got a chance to sit down with Southern Indiana creator of Rock Candy Mountain.  He’s also written a bunch of other great stuff like Rick and Morty, Invader Zim, and Sexcastle.  I learned a lot about his method and riding the rails as a hobo.

Geeks WorldWide: What were the comics you started reading first? And which inspired you to get into the field?

Kyle Starks: Man, when I very first started reading comics it was VERY basic straightforward stuff Claremont/Byrne X-Men, Spider-Man, Hulk, JLA.  So I was a comics fan really young, and for a long time - and I think maybe in high school I harbored some comic book dreams but not really seriously.  I was a fine arts major in college and got into the printing industry after.  It was, notably, the Swedish cartoonist Jason that inspired me to actually make a book.  I read a ton of his stuff: The Last Musketeer, East Bank Gang, I Killed Hitler and was not so much “Hey I could do this” because I think Jason’s stuff is really masterful, but more that it made me feel like making a book was a realistic option for me.  So I did and it was the Legend of Ricky Thunder - which I made just to check something off a bucket list but it ended up getting an unexpected response and then just a series of crazy events led me to doing it full time and I couldn’t be more ecstatic.

GWW: Do you have any non-comic inspirations?

KS: I love literature and cinema - and that’s a crazy long list.  I mean, I feel like, honestly, my work is more directly influenced by film than comics.

GWW:  How would you describe your art style?

GWW: Do you enjoying writing or drawing more, and why?

KS: This is a curious answer, but it’s the truth - whichever I’m doing at the time,  Whenever I’m doing a bunch of scripts, like for Rick and Morty I love how quickly I can get them out when I’m rolling and I think about how time consuming drawing is going to be.  But when I’m drawing there’s literally nothing else I’d rather be doing.  I love it so much.  And I think about how much less control I have when I’m writing for someone else because I know exactly what I want in each of my panels.

GWW: Do you prefer solo or collaborative work?

KS: There are pros and cons to both. To write and draw a book is a lot of work so it’s nice to share that weight and similarly share the process and the success with, for sure.  I think with the write partner collaborating is better, it’s organic and things grow greater than the direction you planned, often for better, but I am pretty particular about action and comedy and feel like right now I’m doing the best job of getting those across on my behalf.  There’s a ton of people I want to work with though, so hopefully larger scale collab stuff is in my future.

GWW: What was the inspiration for Rock Candy Mountain?

KS: I’m a huge action movie fan - I don’t think that’s any secret.  I love a good action flick.  I was trying to pivot that love to martial arts film - and I still sort of am but it’s so daunting.  There’s so much!  Anyway, I was going down the list of “top martial arts films” and became fascinated with the genre called wuxia and especially fascinate with how there didn’t seem to be a western variation of it and I start trying to figure out the Most American way to do it and at the time I was really into hobo stuff and all the pieces just fell together. 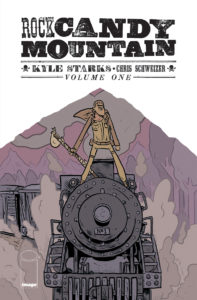 GWW: When did you get interested in the hobo lifestyle?

KS: Right before I started watching martial arts films, oddly enough.  I can’t remember why - I wish I could it makes the answer to this question pretty boring.  I read Knights of the Road by Roger Bruns and went down a crazy hobo rabbit hole and still haven’t really crawled out yet.

GWW: Also, have you ever ridden the rails?

KS: When I was a kid, like preteen, there were train tracks that went by a friend’s house and I definitely jumped on and jumped off but man that is super dumb and super dangerous.  So don’t do that.  Don’t mess with trains, folks.

My colorist, Chris Schweizer, would be way more likely to take up a hobo lifestyle.  He’s a man’s man and loves the outdoors and I love my air conditioning and soft bed.

GWW: Will we see more come from this universe you’ve created?

KS: I hope so! I mean, as you surely know, the market sort of defines that type of thing.  There are more hobo tales I’d love to tell and more corners of this world I’d like to see.

GWW: What does the future hold for you?

KS: Well, immediately, finish up Rock Candy Mountain, keep pumping out that good Rick and Morty content every month.  In September my new OGN from Oni Press comes out called KILL THEM ALL which is an homage to John Woo and 90s action films.  It’s super good.  I have Dead of Winter also coming out monthly through October and hopefully we’ll be announcing more fun, hyper-kinetic Kyle Starks stuff soon!

You can learn more about Kyle Starks at: kylestarks.com.  Find his work at: