Geeks WorldWide: Right off the “bat”, I have to ask, How awesome was it seeing Scott Snyder share the photo of you guys?

Laney Feni: It was super awesome meeting those guys! Snyder had followed me on Instagram a couple months before and asked if he could repost my photo on his twitter, but never did until I met him at Awesomecon and he was like, “Oh, it’s you!” 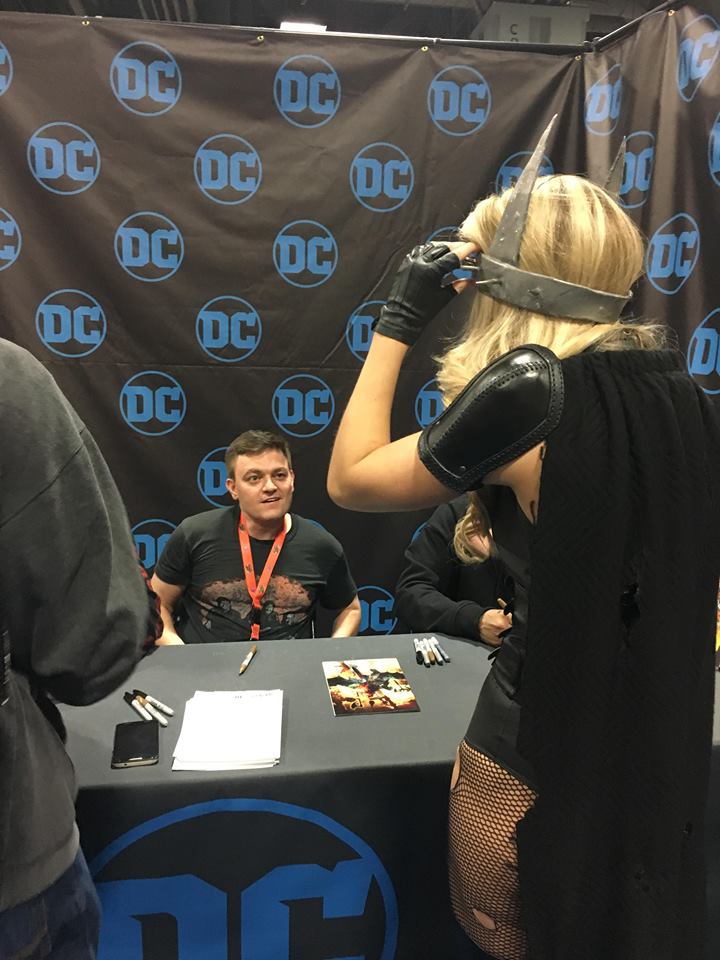 GWW: That Batman Who Laughs was very well done by the way! What was Scott Snyder, Greg Capullo and Jonathan Glapion’s expression when they first saw you? This was fresh after the epic Metal run.

LF: Thank you! It was kind of a thrown together cosplay. I decided to do it the night before MAGfest, instead of wearing a LoL Miss Fortune cosplay I still have in my closet. I actually have a photo of Snyder’s reaction, I will attach it. An old friend of mine was in line in front of me patiently waiting for his comics to be signed. He put his comics on the table but I came in behind him and Snyder and Capullo got distracted and forgot to sign his comics! I felt so bad but he got to go back around and get them signed after. All of their mouths dropped and I just giggled to myself. Snyder was like “Oh hey its you! I follow you on Instagram! We gotta get a pic!” and then asked the bouncer guy to take one, even though he had said no pics before. Capullo didn’t say much and Glapion was just like “Wow, this is really cool” and took some photos of me lookin’ all creepy, which I think he posted on his Instagram also. I kind of black out when I meet people that I look up to. I’m not sure if I blacked out and didn’t say much to them or if I just couldn’t see or hear with that thing on my head.

GWW: So how long have you been cosplaying?

GWW: What was your first cosplay experience? Were you nervous? excited?

LF: My first Comic convention was Baltimore Comicon as Black Canary, which was a closet cosplay. I was super nervous, I’m still super nervous when I cosplay. I don’t know why I get so nervous, I have pretty bad social anxiety although I think I hide it well. Maybe? I don’t like a lot of attention. Yeah Yeah, I know, then why do I cosplay? Haha, I don’t know it’s a like a mixture of nerves and excitement. I met my best friend Marvin at that Convention and we have been going to cons together since.

GWW: Who or What inspired you to take up Cosplaying?

LF: I’ve always been into video games, comics, “nerd stuff”. I didn’t have many friends in school so I literally just played N64 alone in my parents basement pretty much every day, usually Zelda. I was also super into the Phantom Of The Opera and used to dress up like him as a child. Like….. I wore the mask and cape to the grocery store with my mom often. Bless my parents for allowing me to be weird.

As I got older I didn’t know how to incorporate my love of dressing up into real life because I didn’t know about comicon or cosplay yet. I worked as a vampire at Kings Dominion all through college. When I had to become “an adult” and get a career job I thought my dress up days were over…I started volunteering for the children’s charity, Hope for Henry Foundation. We visit children in the hospital dressed as superheroes.  I met some really awesome people through that and they introduced me to the Comicon world.

GWW: Two of my favorite cosplays you’ve absolutely knocked out of the park was Injustice’s Harley Quinn and CW’s Supergirl. In my eyes, you ARE them. That’s how awesome they were. Do you have a favorite cosplay you’ve done? What about one that has received the most praise?

LF: Aww thanks! Harley was like my second REAL cosplay. I want to update her for sure. I think I like my Aquaman cosplay the most and it might also be the one that gets the most praise. My gender bent Man of Steel/ Supergirl of Steel was the first time I guess I was “recognized” in the cosplay community. People usually say like “Oh, you’re that Supergirl” or “You’re that Aquaman… girl”. Aquaman is my favorite because it was the first time I tried worbla and was proud of myself.

GWW: One of the coolest aspects, I’ve noticed, about this community is how supportive all the cosplayers are of each other. Is there another cosplayer you admire or perhaps would love to collaborate with in the future?

LF: Oh Jeez, there are way too many to name! I just love seeing how hard everyone works and how creative people are. I would love to collaborate with anyone that would have me!

LF: Don’t be scared to be creative. Don’t be afraid of judgement, this is a judgement free zone. As long as you try people will love it. We are ALL weird, have anxiety issues, and are scared so don’t think that you are an outsider. Also don’t be afraid to talk to others in the cosplay community and ask for advice!

GWW: Have any future cosplay ideas planned that you would be interested in sharing with us? Any you would absolutely love to do but maybe haven’t gotten to yet? After I saw your Lady Thor, I immediately thought you could totally kick ass as Captain America!

LF: HA! Funny you say that…. I think a gender-bent Cap is next on the list… I love my gender bends.. you know. I’m more of a DC girl, but I do love me some Thor, Cap, and Deadpool. Also I plan on doing all of the supergirls there ever was!

GWW: Have any conventions coming up?

LF: ALLSTAR Comicon in Tysons, VA is my next one in July. I haven’t really figured out after that yet. I usually go to Baltimore and NYCC. However, I would like to travel to the west coast.

GWW: Where can our readers find out?