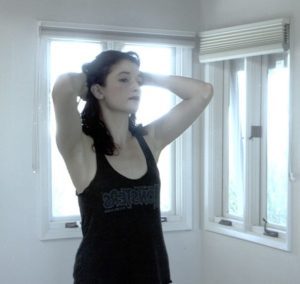 I got to sit down and talk to author of comics like LAST SONG for Black Mask, LOST IN SPACE + others for AGP.  She is also the editor of Famous Monsters.  She is, the one, the only… Holly Interlandi.

Geeks WorldWide: What would you say was your biggest inspiration to get into writing?

Holly Interlandi: Whoo boy. Would you hate me if I said I hardly remember? I was one of those obnoxious bookworm kids who decided to be a writer at age 12. I was reading Michael Crichton’s entire published oeuvre at the time, along with Jack London, Tom Clancy, and some really cheesy young adult horror/thriller books. My early stories were about aliens and killer leeches. I had an amazing English teacher (shout-out to Anna-Clare Straughan) who encouraged my creativity. Thus, a monster was born. I had a brief angsty poetry phase in high school (doesn’t everyone?) but ultimately came back to fiction.

GWW: Do you prefer the comic book or novel format?

HI: I’m going to say comic books only because when it comes to prose, my favorite medium is the short story. The only way LAST SONG ever got written as a novel is because I treated each chapter as its own short story.

GWW: When you originally started writing Lost Song, did you imagine it coming to comics? 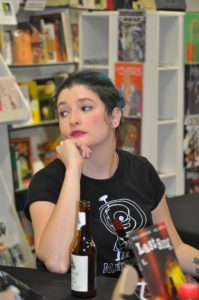 HI: In short? No. I was a creative writing major. I wrote prose. Of course I read comics - ANGEL SANCTUARY, JOHNNY THE HOMICIDAL MANIAC, and THE CROW were some of my goth college faves - but with LAST SONG I always wanted to tell a really detailed, epic story, and it felt like I needed descriptive prose to do that.

GWW: Do you feel it lost or gained anything by changing formats?

HI: I think what finally allowed me to let go of the novel format and tell it as a comic book was that I let so many years go by without publication that when it came time to pitch for Black Mask, I was no longer proud of the prose. I mean, hell, I was 19 and thought I was a fantastic writer. I was OK (my grammar was good), but a lot of things I wrote then make me cringe now. The great thing about bringing it to comic books was the ability to cut a lot of the clunky wordage and preserve the characters, whom I had become intimately familiar with over the years.

Have you seen this:
An Interview With Actor Mark Pellegrino(Supernatural, Lost, 13 Reasons why)

GWW: Of all music genres, why rock-n-roll?

HI: At the risk of sounding like a pretentious twat, I think rock and roll is more of an attitude than an actual genre. There are plenty of musicians that I would consider “rock stars” who are pop, hip hop, or even classical (though that’s admittedly rare…). I’m a bit of a metalhead myself, partially because I enjoy the showmanship involved in ridiculous riffing and costumery; but I also love boy bands because of the pure entertainment value. And I think there are certainly people who can get up on a stage and play some punk songs and still not seem like rock and roll at all. More so than any particular genre, I think of rock and roll as the sensation that you’re seeing something larger-than-life; that a fleeting alchemy of notes and rhythm can capture a cultural zeitgeist; that a whole formed from a bunch of scrawny kids and their instruments has somehow made magic - whatever genre that magic happens to be.

Having said that, there’s a lot to love about a great guitar riff. It sends me places.

GWW: Without giving away too much, what can our readers look forward from you in the future (both with Lost Song and other works)?

HI: With Last Song, let’s say that you might not know the characters as well as you think you do? I hope to make some of you uncomfortable and some of you relieved. Up to you to decide which one. 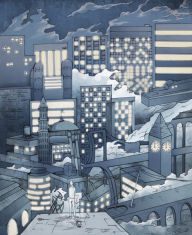 With other stuff, I make comics with American Gothic Press on the regular, and we have some pretty sweet titles you can check out if you dig monsters and things. I also have an e-book of short stories called LOUNGE TALES available at bn.com because I will never fully abandon the prose bug. Down the line I hope to develop a few epic ideas that have been churning as prose projects but might end up in the comic medium as well. Not sure yet. I would love to do one of them with Black Mask. They’re the best.

GWW: How would you personally describe your Lost Song series to somebody who happened across it but was not familiar with your work?

HI: Well, I’ve been using the shorthand “a black and white and gritty Velvet Goldmine”. If you haven’t seen Velvet Goldmine, I guess I can’t help you.

GWW: Who did you write this for?

HI: Hardcore fans. The people who love a particular band and their story so much they could narrate a documentary but nobody seems to care what they think because they are not an “official source.”

You can get the previously mentioned LOUNGE TALES collection at bn.com. LAST SONG is available at your local comic shop, or directly through Black Mask. Comixology has both LS and all of my work with American Gothic Press.