This week at the 25th Annual Austin Film Fest, we had the opportunity to talk with writer, producer and director, Peter Hedges, who attended a special screening of his forthcoming ‘Ben is Back’.

Here’s what Peter had to say from the red carpet:

Peter graciously and thoughtfully discusses his experience with writing, producing, and directing this original story and why it was important to make this particularly intimate and emotional film. He also talks about what it was like working with his son, Lucas (who also stars in the upcoming ‘Boy 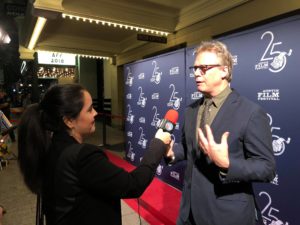 Erased’), and the formidable Julia Roberts.

After the film, Peter also shared more insight into the making of the film during a Q/A session.  The audience learned that the writing process with this particular film was fairly quick. “It was a very exhilarating process. It took me six weeks to write. Then a two week rewrite period and filming in 10 weeks.”  Sadly,the main reason for such a fast-paced process was attributed to his own experiences.

Even though this story is born out of personal tragedy, Peter found a way to include seeds of hope in the film. “I didn’t want to put a movie without hope into the world,” he stated when talking about the what drove him to write an original story - something that takes us all back to the days of ‘What’s Eating Gilbert Grape’. “We need to expand compassion right now.”

Yes, Peter. We certainly do.

Starring Julia Roberts, Lucas Hedges, and Courtney B. Vance, this film is an intimate and emotional portrayal of a loving family grappling to support one if its members as he struggles through drug addiction.

Stay tuned for our review of the film!

Ben is Back Julia Roberts Lucas Hedges peter hedges
Add your voice!Join the conversation on Discord...
Join Our Discord