Interview with Skull Bat Studios on their latest Kickstarter Rephaim: The Shattered City

We got to chat with Jeff and Lacey, the duo behind SkullBat Studios to discuss their latest Kickstarter, Rephaim: The Shattered City. Be sure to check out their campaign live now!

How did Skull Bat Studios come together?

Jeff: We met in college, our freshmen year. Second semester back in 2002. By 2003, we fell in love and moved in together. After we graduated, we both got jobs at Sega QA. Which is entirely her doing.

Lacey: I saw this ad on Craigslist and it was like, ‘Go to this warehouse and  we are going to go through a line of people.” I said this sounded like a great idea.

Jeff: It sounded like a murder warehouse, so I insisted in accompanying her and we both ended up getting jobs out of it.

Lacey: Then I went into Educational Software.

Jeff: I moved from QA to Tech Support. We both ended up as supervisors. I think the turning point was when Sega of America branch fell apart and they moved down south and let everyone go. To me, it was a realization that I had spent some of my best years, sacrificing creativity for a small sense of corporate creativity. We talked it out and decided this is what we wanted to do.

Lacey: We love video games. We both have been playing since we were children so it was always on our brain. If not video games, it was board games, it’s an obsession.

Jeff: That was a turning point. We took our life savings and the severance I got from Sega. She still worked a bit while I tried myself on scripting.

Lacey: I’m more of an art design person, that’s what I studied in college.

Jeff: What we are doing art wise, is totally different from what we studied. We did classic art and high-tech 3D art and now we are doing hyper-retro pixel art. She continued to work while I trained up on some of those core skills for making the game.

Jeff: I was doing interviews initially and looking for other positions but one of the weird things about the gaming and tech industry is that a lot of the bigger companies have these ironclad non-compete and ironclad moonlighting clauses in your contract. In the more traditional gaming sector, anything you make in your own time, it’s not yours. It belongs to the company you work for. So I had a couple of opportunities I was looking at. There was interview in particular where I had this  weird existential crisis.

Jeff: That’s when I realized that I had been sacrificing my creativity and too focused on security and I made a stand in the interview about not wanting to sign the moonlighting clause and I wanted an exception for personal projects. They said we can’t give you a supervisor position if you don’t sign these things.

How did you guys come up with the concept for Rephaim?

Lacey: It was suppose to be very simple. Then our viable product started to get bigger and bigger and we have a friend producing stuff and different companies tell us to drill down our game.

Jeff: We started fleshing out the environmental elements and the enemies. One of the things that has been really important to us is that the animations have been really clean. Also time sensitive. More with pixel art. If you aren’t doing the simple paper doll animations where you are rotating sprites against each other, it’s a lot of work to get it to look clean.

Jeff: We thought pixel art would be kind of a simple thing. We love it. We love the look. It’s just way more meticulous than what we thought it was going to be. It was one of the things where our inexperience caught us off guard a bit.  We were a little more under the gun financially than we liked to be and that’s why we started the Kickstarter.

Exactly. that’s how the internet works these days. Share your passions with other people.  The game provides a very nostalgic feeling. A total NES vibe and then some.

Lacey: That’s kind of our happy childhood, being lost in those games.

Jeff: We wanted to capture the aesthetics of the game. Some differences are we aren’t sticking to the old pallets and you don’t have to get a two-button controller. It’s compatible with an Xbox controller as well.

Jeff: We are also channeling more Castlevania than some of the more complicated games like that old Ninja Gaiden.

The customization was pretty impressive. It provided a bit of a modern feel to a classic look. Changing the appearances with each equipment piece is a nice touch.

Lacey: I went a little crazy when I was designing outfits. There are a lot of outfits.

Lacey: Thankfully we don’t have to do that. We even have a few Easter eggs involving the outfits, kind of a nod to other games. The weapons are going to be really cool. 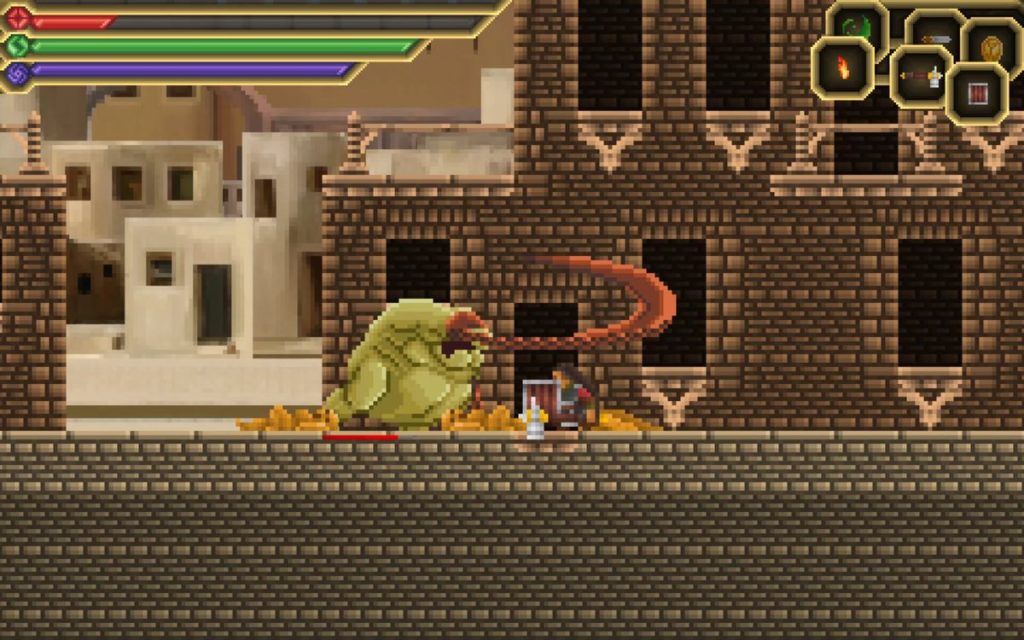 So do you have to, in a way, keep yourself in check, when it comes to designing these sprites and powers? I would imagine staring with a design, then thinking, okay what else can I add, then continuously adding to it after that.

Jeff: The first couple of months it was just adding and adding. It was very much exploratory and I was still learning as we went, especially on the actual scripting and implementation side and getting used unity’s animator and rendering elements. So the first few months were about that then after we got a better understanding of how long it would take, You can throw out a ballpark guess but you are going to be wrong. One thing I do when I am animating an enemy, is I give it these arbitrary size and traits. I’ll say, “okay this enemy is this big, and I think it’s going to be roughly this complex and it’s going to need this many animations.” Then I track how many days it will take me to complete the spreadsheet for this enemy and I’ll put it all on a spreadsheet. Then the spreadsheet, kinda reverse engineers like, Okay that enemy took this many hours to make, well this is how many hours you gave this other enemy to. That is kind of how we developed and refined our estimates is how we came up with how long it would get to each stage. Like I said the first couple of months were experimental and the past year was us being real with ourselves.

Lacey: I think that’s the hardest part really , is trying to ring yourself in because you get really excited about doing it and you are excited that you are making this world and all these monsters with all these abilities.

Jeff: Before our friend who became a Producer told us to reel it in, I was thinking why don’t I give her shape shifting, or a targeting system, or all these complicated things. At one point I wanted to implement a grappling hook, then I realized it was too much.

Lacey: Maybe on the second one.

The music in the trailer certainly caught my attention, how did you go about creating the soundtrack?

Jeff: Our composer is Rob Quillen, he is a San Diego based musician. He is also a family friend. Not only is he an amazing musician and a really talented composer, he also has a few other amazing musicians involved. We posted a work in progress on the site, I wish we would have waited a few extra days because after we posted that one, he sent us another one where he had his brother come in and lay down these intense guitar tracks on it.

Lacey: It’s really good. He sent us the sample the very first time. The first sample, he was playing around but the second one, the moment it hit our hears we knew this was the one.

Jeff: We are really stoked. That mix of instruments was really what we are looking for. Again, it’s taking that classic NES Master System aesthetic and not using it as a chain or weight but adding to it and exploring it.

Lacey: This is going to sound really nerdy but I had started an Manga Anime club with a few friends and it was girls only. Then they were like, can we add some boys because we need dates and stuff.

Jeff: Then several marriages spawned from that club, ours included.

Lacey: That’s the way it goes, make a weird club, and there ya go. I think it’s more of a mutual appreciation for that art, and gaming and dungeons and dragons.

Lacey: I don’t know if you noticed the backgrounds. I tried to make it to where the background moved as you did. I painted it and set it up, and repaint it again in case I missed some spots if it was not flowing correctly you moved the screen.

Something you don’t think about is having different saturation levels between the background and the mid-ground to make sure it doesn’t get too complicated.

Lacey: It makes you think about atmospheric lighting, like the mountains in the way back are going to be more blue than in the city. I definitely looked at games like Muramasa: The Demon Blade. Its set pieces move as the character jumps around.

Jeff: That has really amazing art.

Lacey: That company, Vanillaware is amazing.

Jeff: Yeah, Vanillaware has a lot of inspiration for this game as well, like Odin Sphere.

I know currently the game is set to hit Steam, any plans to release it on console?

Jeff: We would love to have our game on Nintendo, that would be amazing. The thing about the embracing of indie, is that the first party platforms are becoming more open but they are still not fully open. You still have to commit yourself as a developer and purchase a developer kit which can be thousands of dollars. Then you would have to pay the front end cost and you would still have to be vetted by first party as a developer. If you look at Momodora: Reverie Under The Moonlight, which is an amazing game, that came was out for over a year on PC but just recently released on PS4. That’s a great game but it took the success of their PC release in order to get the clout to get it on to console. To me, it’s a pet peeve when start-up indie developers, especially during crowd-funding, when they make it a stretch goal to get it on console. They may have looked up the cost, but you still have to get the approval to even be considered a developer on first party and its sometimes not a promise you can keep. After the game is out, if we have a revenue stream from the game, and if there is interest we will definitely pursue it.