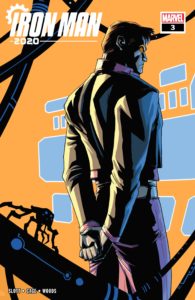 The beginning of 2020 has had quite the adventures for those closest to Tony Stark. Being an AI within the shell of an organic body leading a revolution of other AIs against his brother Arno. A takeover of his company by his brother and then taking over his Irom Man name and armor. A devastating operating system update that’ll make all AIs obedient for the sake of a great evil.

This issue of Iron Man brings us into the thick of the final conflict between the AIs and Arno Stark’s plans to release the update. A major conflict of brother versus brother with a little trip down memory lane. Not to mention a big blow up at the end.

Overall this issue had a lot going for it. The visuals we’re quite stunning, especially when it came to the detail of the masses of robots in the final scenes. The writing and the dialogue were top notch, definitely when it came to the couple of surprises. If this issue has anything to say, it says that this entire Iron Man Arc is something to be seen and if you haven’t started, Now’s the Time!