Is the Shazam! Blu-ray Magic? (REVIEW)

Let me open with a rant. I have high standards for Blu-Ray features. A good Blu-ray (or DVD or 4K) should welcome you behind the curtain into the world of the film. I spent a small fortune buying every Lord of the Rings Box Set that New Line ever released. For me they are the GOLD STANDARD of Blu-rays. They featured hours of documentaries that explained the history of J.R.R Tolkien and Middle Earth and the wonderful little home movie made in New Zealand by Peter Jackson and his people. Those documentaries left you feeling like a comprehensive expert on all things Lord of the Rings. You developed relationships with the cast and crew members and it turned each subsequent film release into an event. I remember being sick once and bargaining with God to just let me live until Return of the King came out. And that’s what a good Blu-ray should do. Enhance your fandom for the property.

Prior to reviewing this Shazam! Blu-ray I was wondering if that was a unique example. The promotion has changed greatly in the age of social media; now actors are building relationships with their audiences (sometimes) even before they are officially cast. So I wondered, do Blu-rays stills serve the same purpose they once did? I was very pleasantly surprised by this release of Shazam!

I expect two interesting documentaries out of any superhero Blu-ray. The first should cover the journey of making the film, from script to screen. The second should be a compelling history of the character. I want to leave the experience feeling like an expert on the protagonist and his world. The Shazam! Blu Ray features an awesome 27-minute, “Making Of,” a documentary that is legitimately funny, fun and interesting. The documentary (in fact, several of them) go a long way to making you really like Zachary Levi. I kind of thought he was a tool for the longest time, but the movie and the documentaries completely changed my perception of him. What an awesome guy, and I’m really rooting for him after watching this Blu Ray. The same goes for director David F. Sandberg who comes off as a smart, thoughtful filmmaker. The special effects scenes were extraordinary to watch. Its so killer to see how these incredibly skilled people can coordinate a bus rig, mall location set piece or Ferris wheel stunt and make it seem effortless. And everyone spoke with such passion and enthusiasm for the project it really made you wish you were a part of it. And that’s what a great special feature does–it makes you wish you were there and anxious to become a part of that property.

Unfortunately, the second component on my wish list was a bit lacking. The Blu-ray has a documentary on the history of Shazam! but unfortunately, it’s just under six minutes long and leaves a lot to be desired for. They mentioned the, “Rich history of Shazam!,” but I wanted to know more. I wish there were another fifteen minutes or so on the history of the character and his context in the universe of DC Comics. The movie did its job and made me interested but this documentary only delivers a summarized history that spends a lot of time celebrating the Geoff Johns run from a few years ago that most of us are already familiar with.

That small deficiency aside, the rest of the documentaries are a joy. There’s a charming documentary celebrating the “Shazamily!” That doc familiarizes you with Levi and the rest of cast. There’s a cool feature on the carnival scene where one stunt coordinator is so giddy to coordinate the destruction of a Ferris wheel that it’s palpable. You really get the feeling that this film was made by people who loved what they were doing and it’s entirely appropriate for a story with such a strong theme of heart and camaraderie. The Shazam! Blu Ray delivers an incredible experience. I am more of a Shazam! the fan now than I was before. I solidly recommend picking this up. 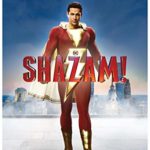