The Justice League of America was the team book back in the day. In fact, the creation of the JLA would directly inspire Stan Lee to create the Fantastic Four and set down the roots for the creation of Marvel’s golden run of characters in the 1960’s. But not everything was wine and roses for DC’s powerhouse team. Let’s take a look at some of the worst covers of the early days of the JLA. 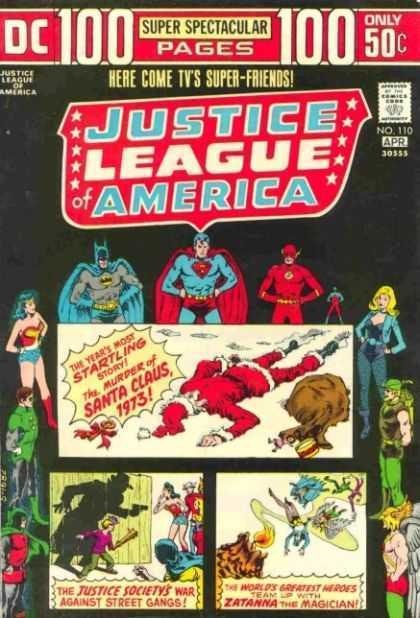 What’s the best way to celebrate the holiday season? Well if you were a kid in 1973 apparently the best way to get ready for Christmas was to see Kris Kringle laying dead in a snowdrift. Boasting the startling story of the murder of Santa Claus, how many kids screamed and cried in stores across the country at the site of this gut-wrenching news? Jesus DC! Have a little decorum, will you?

I’m 37 and even I find that image a little hard to look at! I can’t image what a little kid would have thought seeing that on the comic rack. 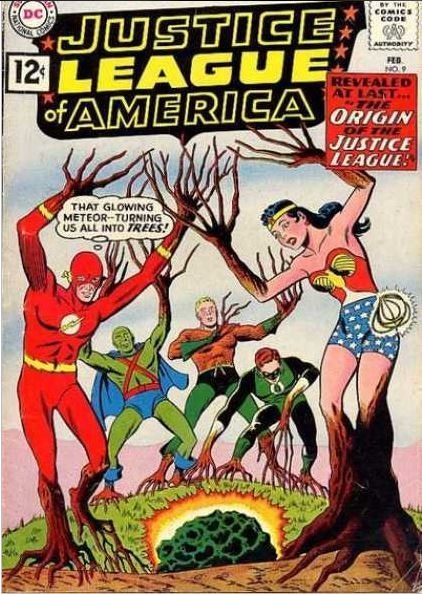 You’re expecting a joke about getting wood or some such other dick joke concerning this cover aren’t you? Well, I’m not going to stoop to that level. I have some class. You’re the filthy pervert thinking about boners. Ya dirty pig! Thinking about hot, throbbing, pulsing, veiny, hairy … ummm… trees. We’re talking about trees, right? 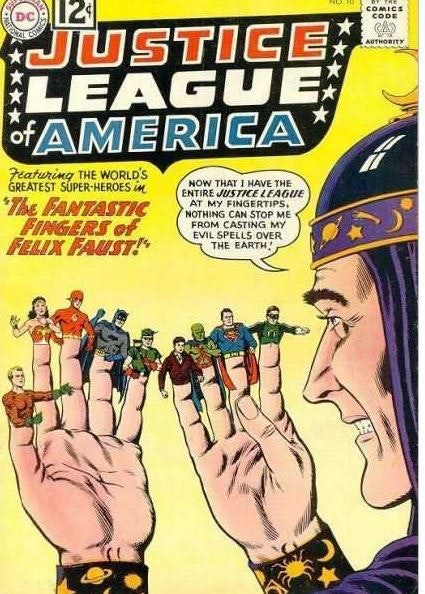 Things that you should never do when your fingers are covered in JLA.

-Pick, pluck, pull, or stroke any part of you or anyone else for that matter.

-Run out of toilet paper.

-Play that game where you try and stab the space between your fingers as fast as you can. Green Lantern gets pissy. 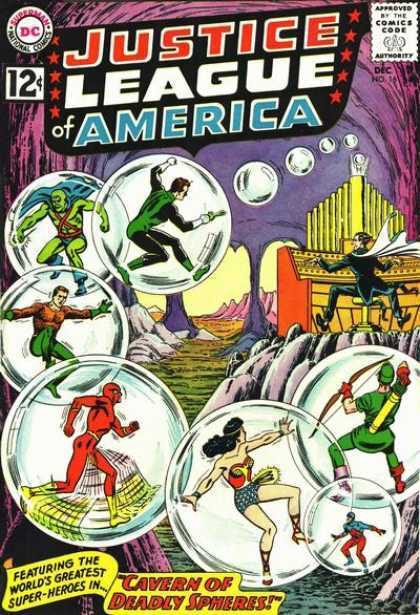 Ah yes, the organ of bubbly doom. Who could forget the first appearance of this classic DC villain? Once a good-hearted church organist, Pepe Mon Shrew lost his mind when he first touched the keys of the haunted Bubble Organ of Fon Du. He would go on to become one of the biggest and worst villains that the JLA would ever face. The downside is that Pepe could only appear where you would expect to find a haunted organ, so churches, baseball games, and performances of Phantom of the Opera were the only spots the Justice League had to worry about. By the way, 98% of this caption is total crap. Kind of like a villain that plays a bubble organ. 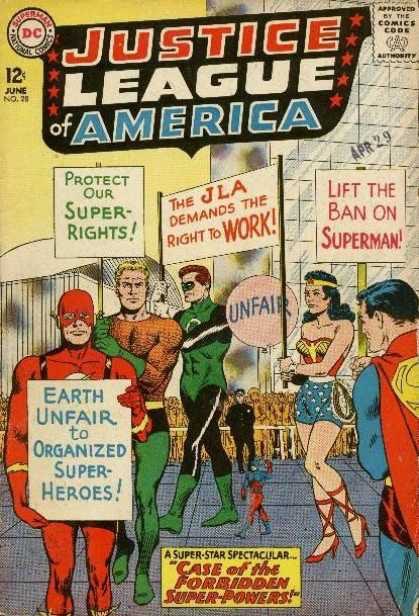 Who knew that this cover would predict the current scene outside Warner Brothers after the Justice League movie flopped. 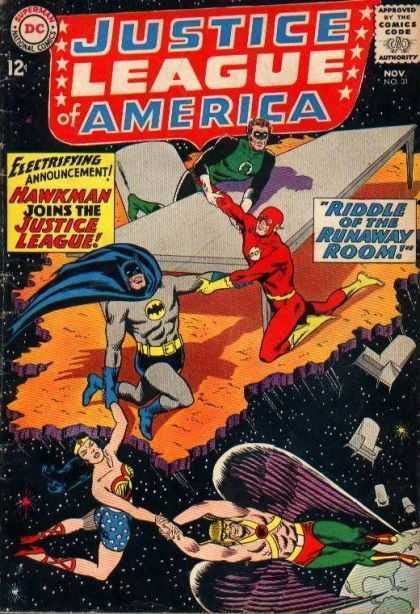 What is with the Justice League taking on everyday household appliances and furniture? First, it was the bubble organ, now it’s a possessed table and chair? What’s next? The dreaded pen of the Apocalypse? The horrors of the Stapler from Tim’s desk drawer? The world’s greatest heroes are forced to stop the threat of an Ikea catalog. Who was writing this? Stephen King? 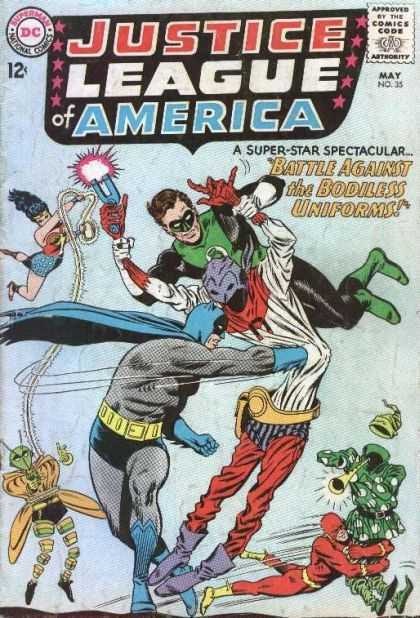 As stated in the caption to the previous cover, I rest my case, as the League fights their laundry. 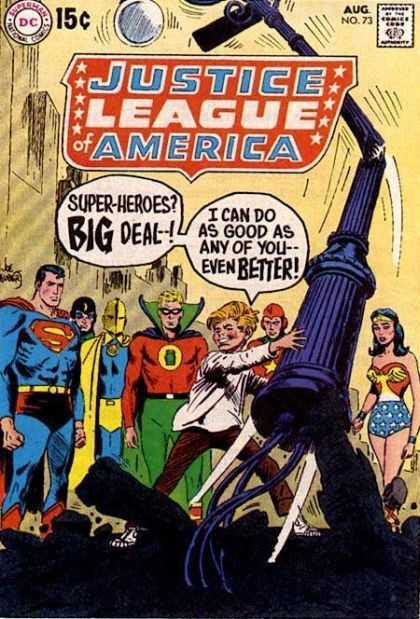 The birth of Comicsgate fandom. 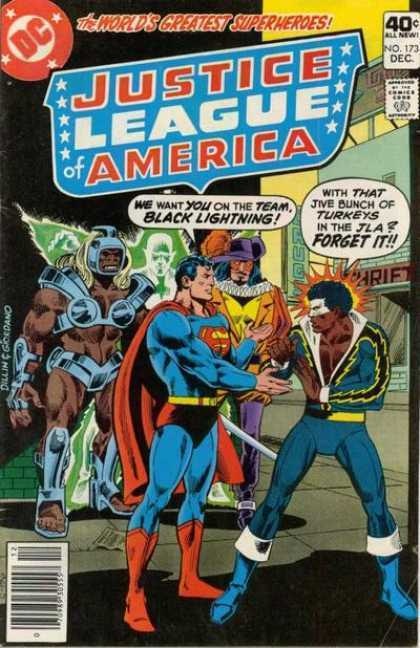 Can you really blame Black Lightning for turning down the offer? I mean that is one sweet collection of Jive Turkeys. On a side note, if you’re looking to spice up your next Thanksgiving be sure to check out Martha Stewart’s recipe for baked Jive Turkey. It’ll be sure to kick your holidays up to the next level or my name isn’t crooked tooth Sweet’ems. 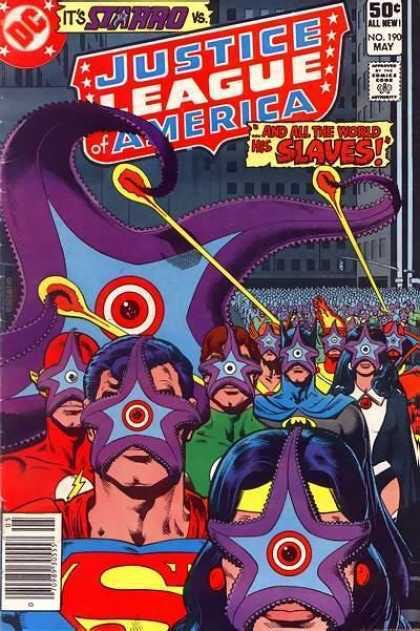 Apple unveils its latest iPhone. It’s a hands-free VR headset. Get yours today! 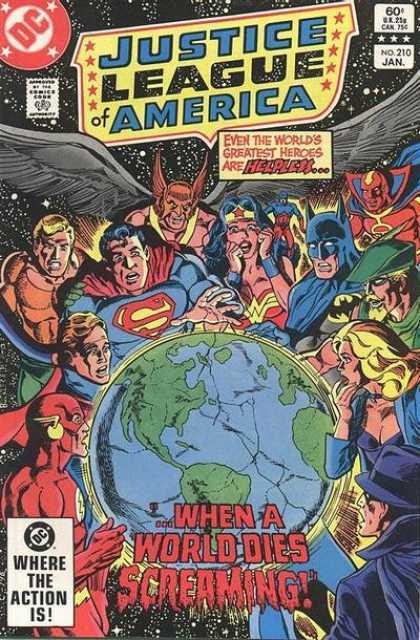 Once again, the DC universe predicts the future as this cover foretells the Trump presidency. 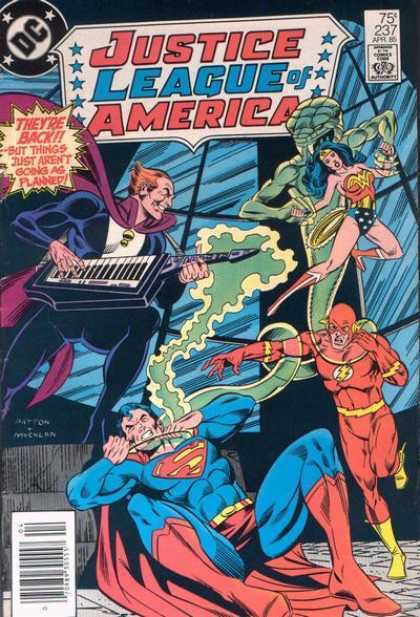 Holy shit! It’s a fucking keytar! You can’t get any more 80’s than that. What could be cooler? 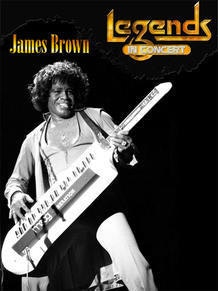 Alright, gang! That wraps up this little venture into the world of JLA. My next installment I’ll be breaking down the first appearance of the Boy Wonder, that’s right! We’re taking on the first issue that features Robin. It’s nuts!