JAKE AND TOM CONQUER THE WORLD #127 – THE MANDALORIAN: A DRUNKEN DORK REVIEW 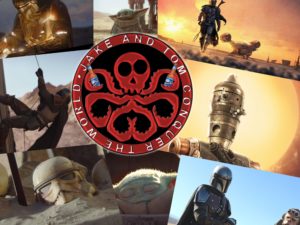 So after months of anticipation, Disney has finally launched their streaming service.  And without a doubt, their crown jewel is their eagerly anticipated original show, “The Mandalorian”!

Listen in as Jake, Tom, and returning Drunken Dork Travis talk about whether or not the show lived up to the hype, if the service is worth the seven bucks a month, and what they think this will mean for the future of the streaming landscape!

And as always, be sure to help Jake in Tom in their quest for world domination by rating them highly on Apple Podcasts, sharing their stuff on social media, following them in Twitter, joining in on the conversation over on their Facebook group, “Jake and Tom Conquer the Group“, listening to Tom’s side project “Someone’s Favorite Movie Podcast” (hosted by friend of the show, Randy Perkins), and by supporting all of the shows brought to you by their partners in internet radio, Geeks Worldwide!