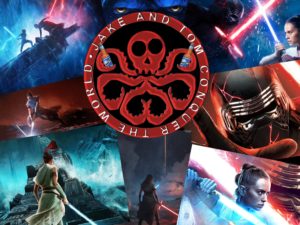 This past Christmas saw the release of “Star Wars: The Rise of Skywalker”, concluding what Disney has now dubbed “The Skywalker Saga”.

This is one of those movies that has split opinions among everyone you talk to, and the fellas are no different.  Some of the dorks say it left them wanting more, while others it was a fun movie as long as you don’t think about it too much.

So listen in as the fellas sift their way through the final chapter of the Sequel Trilogy, share their thoughts on what they think the future of the franchise holds, as well as their final thoughts on the first season of “The Mandalorian”.

And, as always, be sure to help Jake and Tom in the quest for global domination by rating them highly on Apple Podcasts, sharing their stuff on social media, following them on Twitter, and by joining the conversation over on their Facebook group, “Jake and Tom Conquer the Group“.  And if you want more content, make a point to check out Tom’s guest spots over on “Someone’s Favorite Movie Podcast“, hosted by friend of the show Randy Perkins, as well as all of the other great shows brought to you via Jake & tom’s partners in internet radio, Geeks Worldwide!