After a long delay, Jake and Tom have FINALLY posted a new episode.  And it’s a doozy (if not delayed) episode, in which the guys breakdown everything that came out of this year’s San Diego Comic Con!

Listen in as Jake and Tom break down the trailers for “Shazam!”, “Aquaman”, the SUPER awkward “Titans” trailer, the nervous promise of the “Glass” trailer, and so much more!

As always, be sure to help Jake and Tom in their quest for world domination by sharing their stuff on social media, rating them highly on iTunes, and by telling your Android using friends to listen to them via the Amazing And FREE Couch Party App, available exclusively via the Google Play Store!

Don’t forget to follow the guys on Twitter, join the conversation over on their Facebook page, “Jake and Tom Conquer the Group“, and find more great shows like theirs via their partners in internet radio Geeks Worldwide & The PodFix Network! 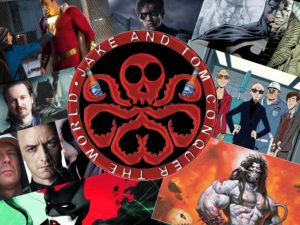