Join Jake and Tom in the first of their special two episode spotlight on the biggest name in superhero cinema, Marvel.

This week, they’re welcoming back their friend and fellow podcaster Roejen Razorwire to look at the past ten years of the Marvel Cinematic Universe.  And while all three of them agree that they’re fans of the properties, they can’t deny that there have been some stumbling blocks along the way.

Listen in as they go through their list of every disappointing villain, bad sequel and mismanaged television show.  And be sure to check back in next week, as the guys bring in original Drunken Dork Travis for their “Before & After” review of Avengers: Infinity War!

Make a point to listen to Roejen and his co-host Lobo every week on their show, “Project: Archivist“.  And be sure to help Jake and Tom in their quest for global dominance by rating them highly on iTunes, sharing their stuff on social media, and by telling your Android using friends to listen to them on the Amazing And FREE Couch Party App, available exclusively on the Google Play Store!

Have you seen this:
Geek To Me Radio #249: ‘I Think You Should Leave’ with Tracey Birdsall-Jim Ousley on ‘The Atonement Bell’

Don’t forget to follow them on Twitter, join the conversation over on their Facebook page, “Jake and Tom Conquer the Group“, and find all kinds of other great shows through their partners in internet radio, Geeks Worldwide & The PodFix Network! 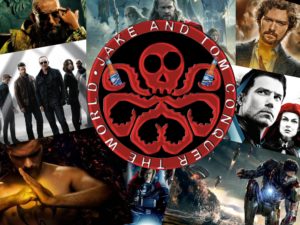