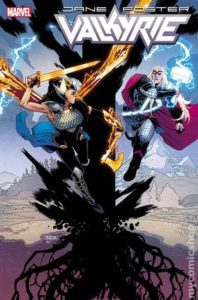 I’m sure I have mentioned many, many, many times before in previous reviews how I’m very far behind in hero comics. I’ve been more of a binge-watch all the movies kind of gal, but it’s high time I switch my TV for the sweet, sweet nostalgia of a paper comic.

Nothing beats a physical comic. It’s one of the best things I collect!

All I know of Jane Foster is she was played by Natalie Portman and, well, that’s it. But now! Well, I can confidently say I quite like this character, and I learned more about her from this comic than the entire Thor movie. I’m, ah, looking forward to that Valkyrie series coming soon (I hope Portman can live up to the legacy!).

On to the actual comic - it’s what you’re here for. It broke my heart to see Jane caught between two worlds; her life as a human, and her life as Valkyrie… and her finding human life to be the more difficult one. I can relate to that. No, I’m not Valkyrie, but sometimes being a human can be difficult, and you rely on something else to ease the burden. Me? It’s being a nerd in my own right, and creating art. Jane? She can ride an awesome talking horse and save the day.

I have no clue what the looming danger is here in this comic but the story end with quite the cliff-hanger. All I’ll say is, Thor is looking kind of 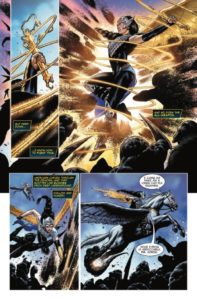 stone-faced. Take that as you will. But! I was happy to see the Avengers help out in this predicament… and to see Spidey take joy in asking questions to a talking horse. It’s the little things.

What? You never talk about the lettering!

I know! But the way the lettering shifts between Jane being Jane, and Jane being Valkyrie is great! The lettering reflects the Norse speech pattern? I’m guessing… considering Thor consistently speaks in this particular font. Regardless, it was a great detail to add.