I thought episode one of the second season of  Jessica Jones came in with a bang, the second offers so many levels of a strong plot that I can’t imagine what is going to be thrown at Jessica and her dare I say ‘sidekick’ Trish this season. Her character is based on facing Demons and she’s not the only one facing them anymore. Trish is taking some risky deep dives into her past that can cause some issues in her future. I especially enjoyed this episode because it put the spotlight on more than one character to build what looks like part of what may be the main plotline of this season.

There’s a major blast from the past in this episode. Question is, good guy or bad guy? Well, that question is answered in a way I never expected and I honestly believe a few people Jessica is close to are out of their league at this point. The build-up and faster pace so early in this season is what makes it great. 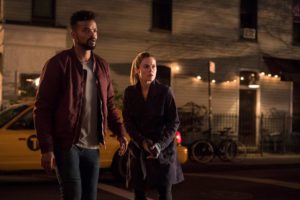 Jessica’s new lengths to get some answers are very intriguing and keep you guessing. Much like season one, it’s perfect in the character building aspect. It’s building many layers to the co-stars as well. I can’t wait to see more of how they all intersect. In all the Marvel Netflix show’s fashion, there’s a perfect suspense ending that leaves you with more questions than answers. It’s ranking, to me as better than the first season.