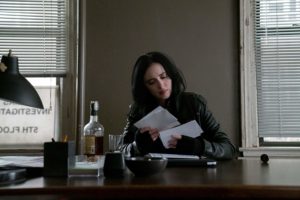 Season one was engrossing and tense. Season two meandered towards a lackluster conclusion. How would season three fair?

Krysten Ritter (as always) fits the character like the pair of broken in jeans she forever wears. She’s effortless in the role and it’s very cool to see her branching out and directing an episode this season. Unfortunately, the supporting cast, isn’t as interesting as it once was. David Tennant and Janet McTeer were powerhouses and the world of Jessica Jones misses them sorely. Jeremy Bobb does not match their charisma as this season’s antagonist. He comes off as a generic serial killer, like something out of an off season of Dexter, complete with arch monologues and uninspired motives. Eka Darville is refreshing as Malcolm and hopefully he finds a bright future beyond the show.

The season hinges on the relationship between Jessica and her best friend Trish “Patsy” Walker aka Hellcat, an iconic Marvel character whose history dates back to the forties. The show reinterprets her origin as a child star and features a few very cool Easter eggs for comic book fans. Rachael Taylor is solid in her portrayal of Trish. Trish has gained superpowers since an experiment in season two and decides to become a vigilante like Jessica, though she takes a very different path. 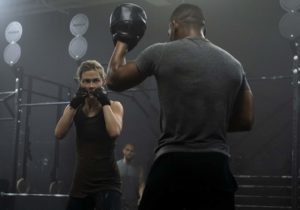 The best episode of the season, (written by veteran superstar writer Jane Espenson), focusses on Trish’s relationship with her manager/mother during her time as a child star and offers some interesting possibilities as to why Trish has turned to vigilantism. Sadly, this isn’t until episode ten and the show takes too long to become interesting. The early episodes spend too much time on complicated and contrived storylines featuring the secondary cast members. The most uneven of them involves a new character Erik Gelden, played by Benjamin Walker. His powers of reading “auras” is confusing, inconsistent and only used when it’s convenient to the story.

The unfortunate (presumed) demise of the show hangs over the head of the season like a stormy cloud. It doesn’t feel like it’s moving towards the final chapter of the Jessica Jones saga, but rather an uncertain middle chapter that doesn’t know what it is and thus disappoints. There’s not a lot that’s fun or fresh here. It’s a thirteen-episode commitment and I don’t see this season bringing in a ton of new viewers. Those familiar with Jessica Jones will have fun playing in that world one last time but they will likely long for the tight, inspired storytelling of season one and Killgrave the Purple Man.