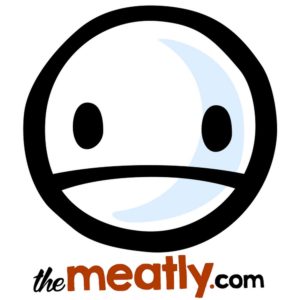 “Bendy and the Ink Machine” has to be a cult classic in the field of recent Indie Games. In short, it’s “what if Disney had gone bad?” But this isn’t about Bendy and the Ink Machine, or BATIM for short. This is about the new mobile game from Joey Drew Studios (theMeatly), where you control the infamous friendly ink demon himself, Bendy, through some of the cartoons from Joey Drew Studios. There is a lot of that warped, old-timey music to accompany the black and white, animated madness (however Bendy appears to be more 3d, than everything else in the game).

Think of this game as a version of Subway Surfers, or Temple Run, except you’re collecting weapons and Bacon Soup cans. You can throw the weapons at the enemies chasing you in order to progress through the level, or “episode.” You swipe with your finger left and right to move him, up to jump, up twice to double jump, and to jump on something, you swipe up then 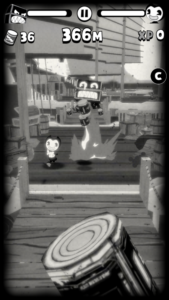 down. Also, instead of running away from the screen, Bendy is running towards you. It’s certainly a different approach to the “runner” game that has become so popular on mobile phones, but it’s a challenge, and a cool one at that.

Now it’s in it’s early stages, so there may be some bugs and issues, of course, but for the first version of this game, it runs well (even on my slowly dying phone!).

It’s a nice free app (with in game purchases of course) for those who can’t afford the other chapters in “BATIM.” But I must wonder as I play through the chapters… will there be any hidden lore, adding to the main game? Only time will tell!