Josh Boone Could Be Bringing The Stand to CBS All-Access

In the midst of news about Josh Boone being brought back for extensive reshoots of his twice delayed The New Mutants film, now there is news that a change is being made to his upcoming adaptation of Stephen King’s The Stand. 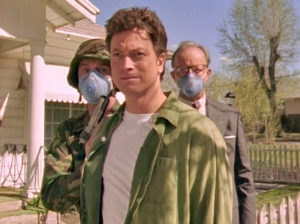 According to stories in Den of Geek and Slashfilm, Boone is still attached to direct the adaptation of Stephen King’s post-apocalyptic novel, but instead of it being a movie or series of movies, The Stand will air as a ten episode series on CBS’s All Access streaming service (home of Star Trek: Discovery and The Good Fight). Boone has been involved with the projects since 2014 and has been trying to get it made in different forms since.

The Stand was slated to be the director’s next project after The New Mutants, but the reshoots have put the project on hold again. The Tracking Board, which broke the original story is also stating that Boone is expected to reshoot almost half of The New Mutants again, so there is no start date for production of The Stand at this point and no cast announced.

cbs all access josh boone Stephen King the stand
Are you an Insider?News, reviews, & updates are just the beginning.