This weekend, you have the chance to revisit the Jurassic Park franchise with the 5th film – Jurassic World: Fallen Kingdom. Chris Pratt and Bryce Dallas Howard reprise their roles of Owen Grady and Claire Dearing. The pair is recruited by an emissary of John Hammond’s partner, Benjamin Lockwood (played by James Cromwell), with a mission to return to Isla Nublar and help rescue Blue, the velociraptor that Owen raised and trained before an erupting volcano wipes out the island. Claire brings along two specialists, Franklin and Zia (actors Justice Smith and Daniella Pineda, respectively) to help activate the dinosaurs trackers thus make it easier for them to locate and rescue them. Upon securing Blue, the group is double-crossed by the paramilitary task force working for Lockwood’s accountant, Eli Mills (played by Rafe Spall). While Lockwood thinks the dinosaurs are being rescued and transported to a new sanctuary island, Mills instead plans to sell the dinosaurs off to the highest bidder while using Blue as a guide to help control the latest crossbreed of dinosaur – the Endoraptor. Once again, BD Wong reprises his role of evil scientist Dr. Wu who is assisting Mills in his plan from a secret sub-basement under Lockwood’s sprawling mansion. With the auction underway, Owen and Claire must find a way to stop the remaining dinosaurs from being sold off while also keeping themselves and Lockwood’s granddaughter safe from the newly released Endoraptor.

While I was initially quite excited about this movie, the execution left me a bit underwhelmed. The film suffers from the same problem that has beset other movies in the franchise with a slightly lacking sense of character development. In fact, a reveal about Lockwood and his family was made in the film that I found to be interesting but still fell a little flat for me as I was never invested enough in those characters to really care. Lockwood’s granddaughter Maisie (played by Isabella Sermon), Chris Pratt and Daniella Pineda deliver the best performances of the movie and, of course,  it’s always a delight to see BD Wongin this series. Having Jeff Goldblum back was a nice touch, but he was, sadly, only on-screen for mere moments in the beginning and again at the very end to bookend the piece while testifying before Congress as to whether or not the government should take action to save the dinosaurs. The cat-and-mouse game through the mansion to elude the Endoraptor was fun and reminiscent of the first film’s chase through the park’s kitchen and welcome center by the velociraptors. For me, the dinosaurs were the stars of this movie while the actual actors seemed more like just set dressing. If that’s what the writers and the director were going for, then they nailed it. However, I suspect that wasn’t the overall intention. After seeing this 5th film of the series, I would now rank them from favorite to least favorite as 1, 4, 2, 5, 3. Fallen Kingdom certainly had its moments, but they were too few and far between to cause me to love this movie as much as I have others in the franchise. This is the best Jurassic film but I still suspect that it will take a sizable bite out of this weekend’s box office!! 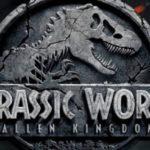