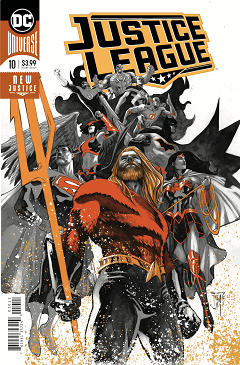 The prelude to Drowned Earth begins with a young Arthur Curry musing to his father that he wishes there were more oceans to explore. In the present, Aquaman, Wonder Woman and Firestorm find themselves in an area of the ocean where a mysterious assortment of vessels from across time have converged and Arthur thinks that their presence has to do with one of the greatest heroes of Atlantis.

At the same time, Batman is directing the team from the Hall of Justice as Superman takes a team to hunt for the Legion of Doom and Martian Manhunter leads a group to Thanagarian space. When Arthur finds a mysterious device among the wreckage of one of the ships, his team is attacked and he is brought before a group of Ocean dwelling deities from across the galaxy. Unfortunately, for the Earth, they are not there to be peaceful.

I was impressed with this prelude for many reasons. I wanted to see a well-written story featuring Aquaman. I wanted to see how Arthur continues to deal with not sitting on the throne. Snyder delivered on those things and many more. One of the things that I find the most compelling about this story so far and how it continues from the previous arc is how sidelining Batman gives the rest of the characters the opportunity to shine in ways they normally don’t. It’s going to be interesting to see how the wave has affected Batman considering what that energy did to Firestorm.

Manapul’s art is brilliant. Both the composition of the panels and the vibrancy of the colors make the art sync perfectly with the tone of this story. Great issue.