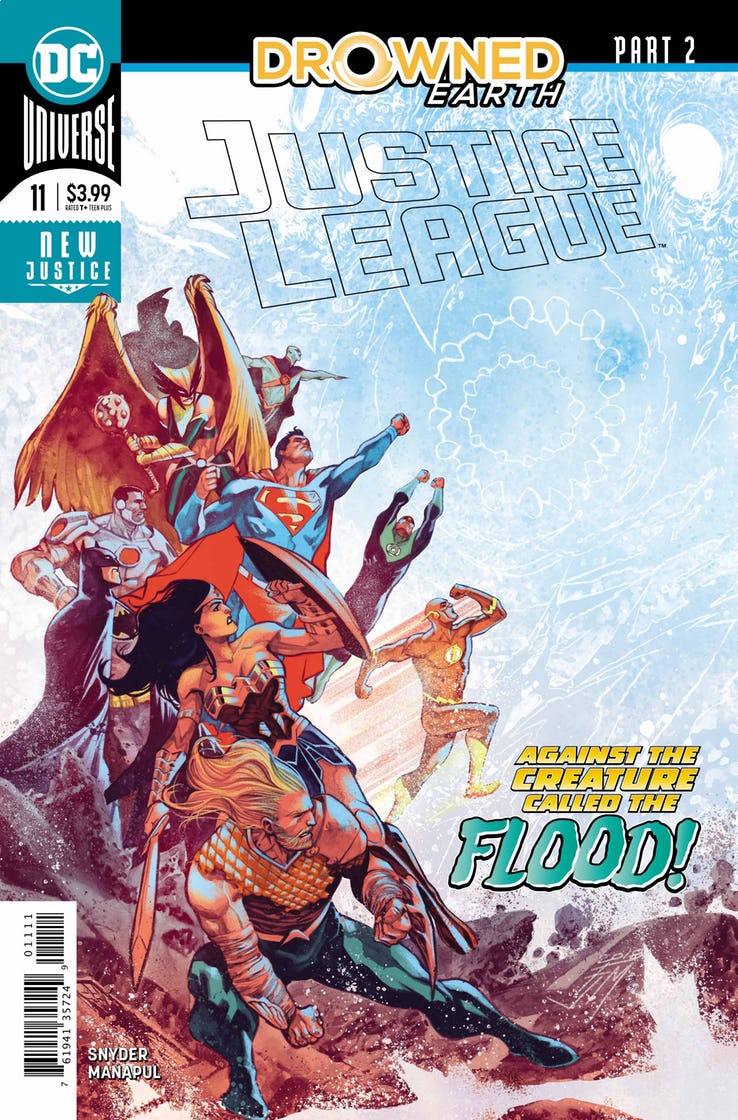 As Mera remembers a lesson from her father, Batman is trying to hold everything and everyone together while being trapped in the Hall of Justice under an ocean of dark water. Without Martian Manhunter or Miss Martian to maintain the psychic link between the heroes, Batman must rely on Jarro (I will never stop chuckling at that name) to keep him in contact with the remaining members of the League.

Superman, Flash, and Mera find themselves on the run across the ocean as mutated heroes are in pursuit, Superman is injured and Flash is slowly feeling the effects of being exposed to the water itself. Arthur’s powers have been taken from him and given to his greatest enemy and his captors have sentenced the former king of Atlantis to death. Things are looking dire for the League when the Legion of Doom decides to make their next move.

Snyder does a great job of raising the stakes in this issue. Not only does the reader see the League struggle with what to do next, but there are great moments throughout that show the true measure of Aquaman’s heroism. It’s going to be interesting to see how Aquaman’s powers are explored in this series, especially when they are being used by someone else. Batman’s position both in the League and in the Hall add an additional level of tension to this issue and the appearance of the Legion does a great job of tying back into the previous arc and continuing the threat of this new Legion and their quest for the Totality.

Manapul’s art is always brilliant and I particularly like the composition of the panels. My favorite one is the final panel at the end because it encompasses so much menace. Definitely a story that has me engaged as a reader.

If you like this Justice League comic, you may like some collectibles too! If you happen to buy something from this site, it helps keep GWW afloat, which we appreciate 😉