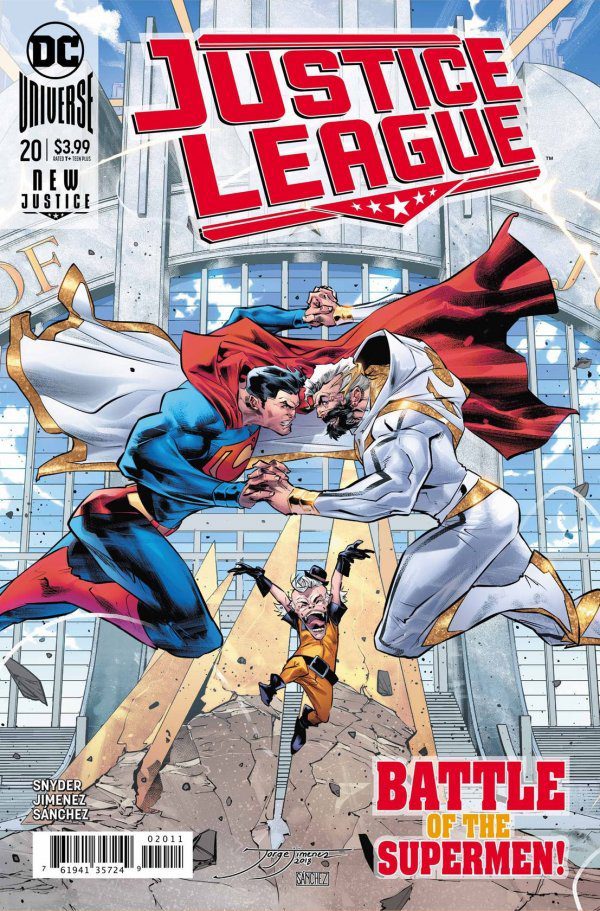 The Justice League has crossed the threshold of dimensions and emerged in a utopia of their own design. Superman, decked out in a white suit, ushers his friends to the future where they meet their future selves and see the world they were able to create after defeating Perpetua and re-shaping the Multiverse.

After hearing that they’ve won, Batman wants to know how, but Clark assures him that answers will be coming after taking the time to look around and enjoy the world they helped create. Bruce sees a Gotham free from crime and injustice. Diana sees a new Themyscira populated by scholars. Barry and John Stewart see how they’ve combined their powers to create new worlds to populate the multiverse. The biggest reveal is J’onn and Kendra’s relationship and what it spawned.

Back in the real world, Jarro is unable to link to Bruce because he is in the midst of living out his ultimate father/son fantasy with the Dark Knight. Mera and Starman are unable to reach Mxyzptlk and Superman can’t escape the dark, barren wasteland he’s trapped in. What makes matters worse is that the imp has gone rogue and Lex seems to have a hand in it as well as another ace up his sleeve.

Scott Snyder raises both the bar and the stakes with this issue. The introduction of the fifth dimension into this story opens up untold avenues of storytelling. One of the best things about Snyder’s journey through the DC universe with this run is his use of characters that fans recognize, but haven’t been used too much. He breathes new life into the characters and has given them interesting connections to each other and the events currently unfolding.

Jorge Jiminez continues to deliver beautiful, breathtaking art in this series and this issue especially. The story of Perpetua looks gorgeous on the page and every panel is filled with beautiful details that catch the eye.