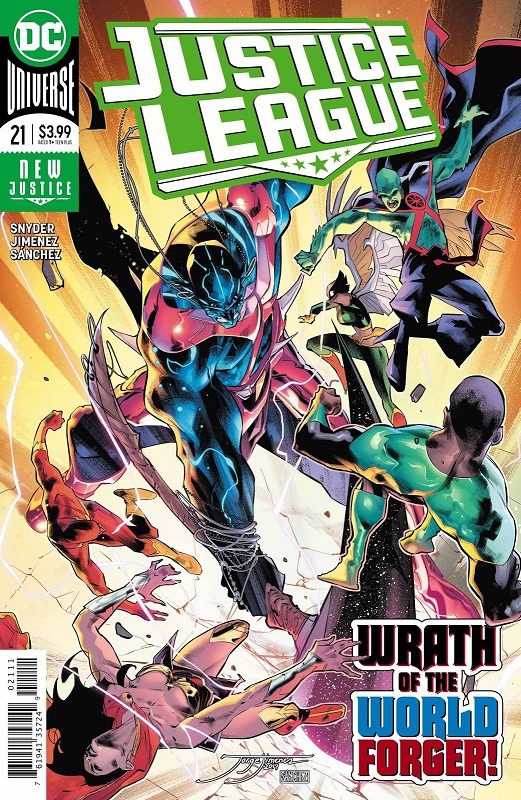 Superman is still trapped with no means of escape and his future doppelganger has all the power and control, which he gladly shows his prisoner before explaining to him that there is no escape. Back in the future, Bruce is marveling at the utopia Gotham has become as he has tea with Dick in the spot that used to be Arkham Asylum. Dick explains to him that hard choices are going to have to be made if this is the future he and the rest of the League want.

When the team is called to the psychic boardroom by J’onn and Kendra, they are told that this world is not what they think. Before Shayne can explain, Superman takes control of the room and reveals himself to be someone with an intimate knowledge of the events happening around them and a choice for the League if they want the utopia they are living in to become their reality.

Back on Earth, Starman and Mera are dealing with an enraged and enlarged Mxyzptlyk wreaking havoc throughout the city. When Jarro connects to the imp to try and help, it discovers that his plans are far more destructive than they all feared.

Scott Snyder once again takes all your expectations and predictions, sticks them in an industrial-sized blender and whips up something new and exciting that you never knew you always wanted. Batman is written with a more cynical bent based on who he is and his recent experiences with Barbatos and having his point of view veer from that of the group is a great character and dramatic choice. The end of the issue is pure genius with a reveal that is both shocking in its implications and inspired in its choice.

Jorge Jimenez kills it with the art in this issue. There is so much beautiful detail throughout this issue from the character designs to the dynamic backgrounds. Great looking issue.