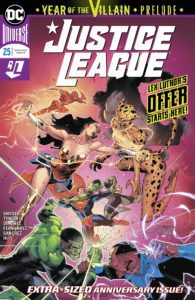 The World Forger is prepared to replace reality with the one he designed to stop Perpetua and the judgement of the universe. All he needs is for Batman to act, but both Bruce and the Forger did not count on the resolve of the Justice League. The team fights back as Batman makes a final plea to let him try to convince his team that they are making the right decision.

At the same time, Superman is fading fast in a dimension devoid of light, but he still holds to hope and that might be exactly what he needs to navigate his way out of the darkness and back to his friends. To make matters worse for the Justice League as they fight to stop the Forger, they might already be too late to stop the world from siding with Lex Luthor when he makes them an offer many could not refuse.

Scott Snyder blows the doors off this issue with truly surprising moments borne out of an intense and well crafted set up. He builds layer after layer of grand story and great character development as he affirms the best of both Superman and Batman in one surprising and exciting moment. Everything Snyder and James Tynion IV are building too in this storyline has been paying off with fantastic writing and a focus on character in every arc.

Jorge Jimenez creates some truly astounding art from beginning to end in this issue. The action is beautiful and dynamic and the characters are vibrant and powerful to behold. A beautiful looking issue.