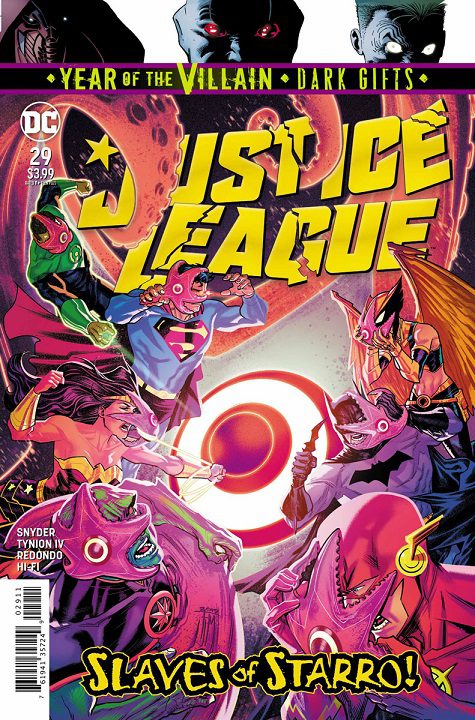 The rise and history of the conqueror Starro is featured in a story that will take the latest iteration of the creature and give it the opportunity to be the hero it wants its father to be proud of. Jarro has finally found the hidden location of the Legion of Doom and it is determined to defeat Lex Luthor and his team before Lex can discover the final key to power Perpetua.

With Batman and the rest of the League both searching for the Legion of Doom and trying to recruit new heroes to fight the upcoming war, Jarro is on its own and makes a pretty decent fight of it. When Batman discovers where his surrogate son has run off to, the League springs into action to find it and fight the Legion. Unfortunately for all of them, there is a terrible secret at the heart of this mission. What makes it more terrible is that it is motivated by love.

Scott Snyder and James Tynion IV take a step back from the build-up to the Justice/Doom War to showcase Jarro and its evolution from the being it was to the hero it is trying to be. It’s a really good story that gives the reader an insight into the character as well as brings hope of a possible victory for the forces of Justice. But like other interludes, there is a catch and Snyder and Tynion IV allow that to unfold in a manner that is both frustrating and perfectly executed. There is also a moment of real heart in this issue that is unexpected, but welcome.

Bruno Redondo does an excellent job with the art in this issue. Everything from the characters to the action looks amazing.