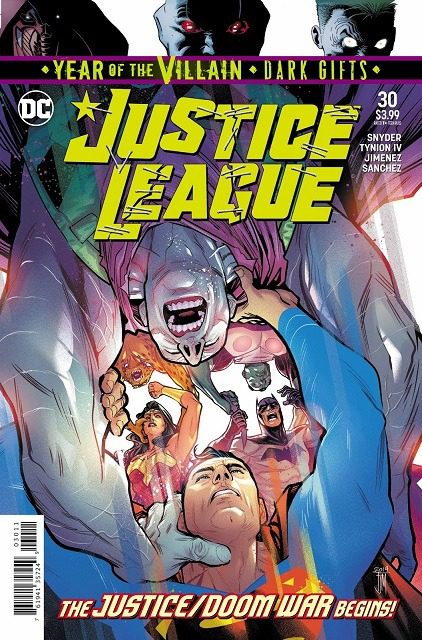 Starman shows the Justice League the violent aftermath of their final battle with Lex Luthor and the Legion of Doom. In order to prevent this fate, they recruit every hero that they can find and task them with defending the Hall of Justice from an attack to take the last piece of the Totality. At the same time, the League will travel to two different points in time to retrieve items that might give them a chance in the upcoming fight.

At the same time, Luthor and Perpetua prepare for their upcoming victory and Lex shows her the forces he has gathered to fight for Doom. When Brainiac discovers the League’s plan, Lex and his team spring into action.

When the teams emerge in both the past and future, they quickly find that the world has changed in both timelines.

Setting a story in three different and divergent time periods is a daunting task for any writer. Scott Snyder and James Tynion IV are embarking on a huge undertaking with the Justice/Doom War, but this first issue lets me know that they are up to the task. The dialogue is fantastic and the plot is filled with amazing character moments. One of the more interesting story threads to follow will be the anger growing inside of Kendra. Both sides of this story have some intense and engaging moments and it will be interesting to see where this story goes next.

Jorge Jimenez delivers some fantastic art throughout this issue. Everything from the characters to the backgrounds look fantastic.