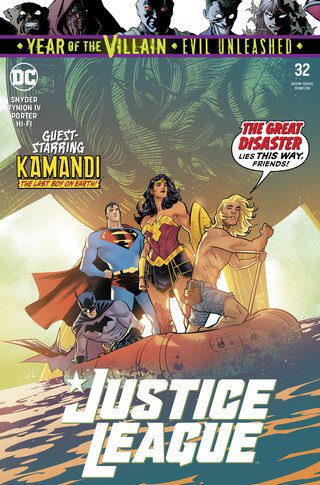 As Lex and Perpetua race to the edge of the universe, the two Justice League teams battle it out across time for the final pieces of the Totality.

John Stewart and Barry Allen have teamed with the JSA to find the first piece in the past, but their mission will take them into the heart of the battle of Pearl Harbor with Sinestro leading the attack against them. When they finally find the piece, they find it difficult to get to because of Grodd controlling the soldiers surrounding it. With both sides opposing each other, an unexpected third party steps in to aid one of the sides.

At the same time across time, Superman, Batman and Wonder Woman face off against the Brainiac controlled Justice Legion and an army of robots. Kamandi is disillusioned by what he sees, but Diana assures him that they can win. When Brainiac reveals himself and his new power, it looks like all is lost, but hope remains. When Lex and Perpetua reach their destination, they find the Anti-Monitor, but the reunion does not go the way she expected.

Right out of the gate, Snyder and Tynion IV take the reader on a journey of highs and lows as the heroes face both triumph and potential tragedy and every positive moment has its counterpart in evil. Both writers strike a brilliant balance in this story that has thrilling moments throughout. The emotional stakes continue to make this series and this story-line captivating to me as a reader. Blending the time periods and the nods to the events that changed the universe are welcome and add new layers to the storytelling.

Howard Porter adds a lot of drama to the art as well. His style is the perfect complement to the tone of this story.