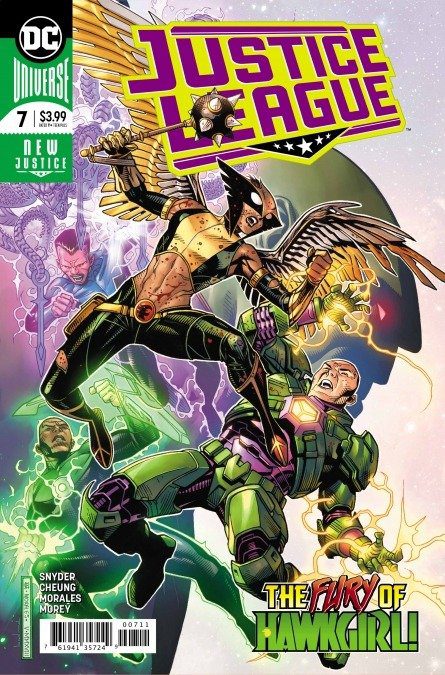 The Leagues is going for the final push to stop the Totality and the Legion of Doom from drawing the planet into the Umbrax. With many members of the League sidelined, it’s going to take an unusual approach by the League to stop this latest threat. An approach that sees another shift in Hawkgirl’s powers, Flash trying to slow down and John Stewart moving faster than he has before. With all of this going on, Lex Luthor is getting closer and closer to his prize of possessing the Totality and seeing what the late Vandal Savage saw when he discovered it.

With Luthor and Kendra locked in battle, John taking on Sinestro and the memories of his greatest failure along with Aquaman trying to stop Manta, Cheetah, and Grodd, the League is being pushed to its limits and beyond. Both sides are fighting for the fate of the world and each side believes that they are doing the right thing. It is an epic battle which not only leaves one member of the League with information he doesn’t want but also opens a new tragic future for the League as well as puts Luthor in league with one of the darkest denizens of the Dark Multiverse.

Have you seen this:
Future State: Gotham #1

Snyder really brings it home with this issue. Not only is there some great character-driven action, but the writer takes the time to add some layers of duality and conflict to the narrative. There is a great moment where the heroes question whether they are impeding the evolution of the earth itself through their actions and if the plan for the universe is one of brutality. There are some pretty heavy themes being brought up in this issue and Snyder looks like he’s building to something really interesting with the reveal at the end of this issue.

Cheung sets up the perfect balance with the art in this issue. It can shift from subtle, character moments to bombastic action and there are moments of great tension brought to the page through Cheung’s use of details in both the foreground and background action. There is a great use of color and composition as well in this issue and everything works to complement both the art and the story. I really want to see where this story goes, especially with who Luthor is teaming up with next.