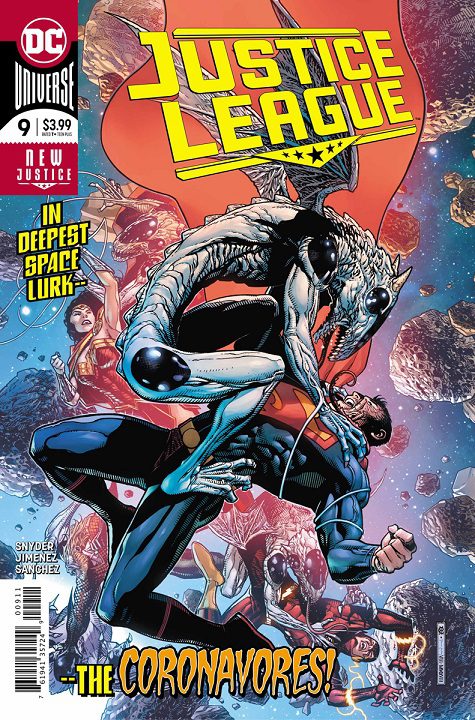 In the skies over the Hall of Justice, Superman takes on the Herculean task of putting the moon back together piece by piece. His work is hampered by attacks from a race of solar radiation consuming aliens and Batman in his ear. As Superman stays on task, the rest of League settles in to creating environments at the Hall that are specific to their needs. John and Barry discuss the changes that are happening around them in the mess hall and Diana gets some help from Arthur setting up a chapel in the building.

In the hustle and bustle of building a home, Arthur laments his choice of leaving Atlantis as Kendra and J’onn have a sparring session that Hawkgirl takes a little too personally. The team continues to contemplate what’s coming next and Batman is doing his best to prepare his team for all scenarios.

This issue has all the hallmarks of a slice of lifestyle story for these heroes. While there is a threat in the Coronavores, the real story is how this team is dealing with the truly unknown. It’s a little change of pace for Snyder and it works for the most part. The issue gives readers the opportunity to catch up with the team dynamics and interpersonal relationships before immersing the audience back into another adventure. Snyder does a great job of slowing down the story and keeping the characters as the focus. Even with that, he manages to incorporate plot points to upcoming storylines and events that will dive back into the action.

Jimenez has some truly beautiful art in this issue. There are so many shots that are breathtaking to look at in both the way the characters are drawn and the truly impressive backgrounds and renderings of the team’s quarters.