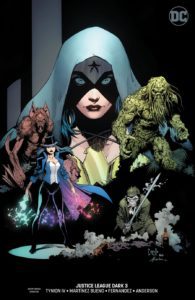 Magic wants its magic back. As cheap as it sounds, that’s the overall conclusion of this story arch. They introduce The Upside-Down Man who is the liaison of the darkness of magic and does the traditional evil monologue we have come to expect from an omnipotent being.

We do see that the magical world is bigger and more hostile towards humans. This hostility is from when man learned of the magical world and stole from it. As the story continues we get a glimpse of how powerful the magic world is and the unlimited power it yields.

The art is unique as so much is going on in the panels. Bueno is able to handle the chaotic nature that magic has embraced. There are some panels that have the characters featureless and something else takes full priority. He is able to adapt to the ever-changing carnage that The Upside-Down man dishes out to the team.

Tynion IV gives a basic story structure. All hope is lost but at the 12th hour by some unknown savior. We see some of the typical villains’ cliques on display, most notably the monologue from The Upside-Down man He had the potential for being a welcomed new villain with an actual grudge.

Justice League Dark #3’s conclusion allows the story to keep going. It played too much on the safe side, which caused the story to become predictable. The art was able to keep up with the story and added some unique flair to an otherwise hackneyed story.