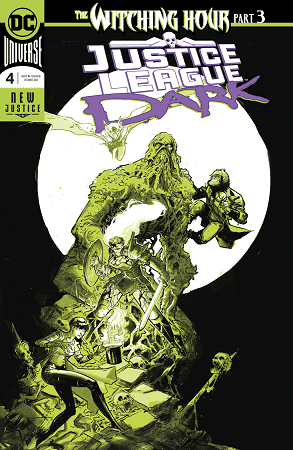 Holy Hell in a hand basket this is a whopper of a read! I’ve never been big on the magical elements of the DC universe; I stick more to the traditional capes and cowls, but man oh man! This series is starting to shape up in a big way by having the kind of grand storytelling that makes all great Justice League stories stand out.

For those of you that are just coming into this series, there is a lot to catch up on, but the elevator pitch would be this:

Wonder Woman is fighting to save the magical elements of the DC universe with the help of Swamp Thing, John Constantine, Zatanna, Detective Chimp, Man-Bat, and Deadman. Together this rag-tag team is chasing down a possessed Manitou Dawn, who is currently under the influence of Hecate. Hecate’s goal is to destroy the magic of the world to remake it in her image. In this issue, Manitou leads an all-out assault on the magical city of Nanda Parbat. Got all that? Great!

Have you seen this:
Wonder Girl #2 (REVIEW)

The plot might sound a bit confusing, but watching all the action play out in this issue is pulse-pounding, as the creative team ramp up the stakes right from the jump. Tynion takes his skills that he has used so well in the Batman universe and let them loose on this series. He plays up the action and the consequences; the team feels fleshed out and play off of one another effortlessly. By the time we hit the end of the issue, it feels like the entire world is hanging in the balance.

Bueno’s art style is fitting for this series. His work is dark and textured. It matches the tone of the storytelling to a tee. There is little doubt that this pairing of writer and artist will only continue to wow the audience as they play with elements on a cosmic scale. There are Gods fighting in this issue and Bueno handles the visuals to make the reader feel the raw power fly off of the page.

There are some really cool moments in this issue that you have to read for yourself, but as good as this issue was the groundwork that has been laid out for issue four makes the upcoming installment even more enticing. I love the direction of this series and I can’t wait to read more!