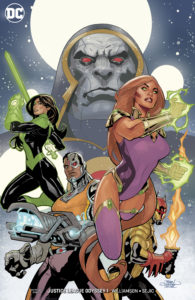 Fear not, for delays do not seem to hurt this giant space epic that Joshua Williamson is crafting. Even Stjepan Sejic’s art didn’t feel rushed after the previous issues he’d drawn were scrapped (but sadly this means we’re only getting two issues with his art).

Starting off with Green Lantern Jessica Cruz guarding the Ghost Sector, which is what came after thousands of planets were released from Colu, (creating a whole mess of its own) she quickly encounters Cyborg and Starfire, who are traveling in one of Brainiac’s ships, with Azrael as a stowaway. Cyborg is using Brainiac’s ship to help Starfire track down her home planet of Tamaran, which was one of the planets released from Colu. Azrael hears a voice in his head calling him to the Ghost Sector. Just as Jessica meets them, they are attacked by what can only be described as a Space Dragon, which they get away from by hurtling into the ground of another planet. Once on this planet, Darkseid appears, telling Cyborg, Starfire, and Azrael that the planets were hidden away on Colu for a reason: the planets worshipped the three as the Old Gods, and that it was their destiny to save the Ghost Sector and bring about a ‘New Age of the Multiverse.’

Williamson’s story had obvious signs of being rewritten in a rush but that didn’t seem to deter his faith in what he could do with these characters and given more time to spend writing them, I think he has the next big Justice League team in his hands. Each character definitely feels like they will get a chance to shine over the coming arcs, with Star, Cyborg, and Azrael being the focus. I’m surprised Jessica was even included because, for the time being, she doesn’t seem to have a huge role to play yet. Darkseid’s involvement definitely seems more villainous than he is letting on, so anyone concerned about him joining the Justice League should read on, for it doesn’t feel permanent at all.

The art that Sejic was able to provide on such short notice was absolutely gorgeous, as his art always is. Just don’t get too attached because he’s not sticking around on this book after issue two. The character designs are great, this being the first time I didn’t actually dislike Cyborg’s human-face-only look. Darkseid looked like a creepy prophesying priest which fits the tone of his personality in this story perfectly. Sejic also nailed the looks of Starfire and Jessica, adding a little more detail to their current costumes, which are their best ones in my opinion. Azrael had a pretty serious ‘Space Knight’ vibe going on, which made me feel a lot better about him joining a cosmic team.

Justice League Odyssey #1 was a strong first issue which seemed to be more setup than anything due to the rewrites, but with great art and a compelling story, this book could really take off if it doesn’t face any more editorial delays.