Forget Mario Party, Keep Talking and Nobody Explodes is one of the must-have party games for the Nintendo Switch. The premise is simple, one player is trapped in a room with a bomb and must defuse it with the help of  “Experts” and their trusty Bomb Defusal Manuals. The catch is, the Experts, a.k.a. your fellow players, cannot see the bomb. Check out the trailer below:

Originally, Ottawa based Steel Crate Games brought Keep Talking and Nobody Explodes to PC and Mac way back in 2015. When word of mouth spread about a fun co-op game with amazing replay-ability, Keep Talking exploded in popularity (I had to get one in there). Eventually the game was ported to Oculus, a perfect platform for its unique gameplay, and most recently was brought to the XBOX One, PlayStation 4, and Nintendo Switch. 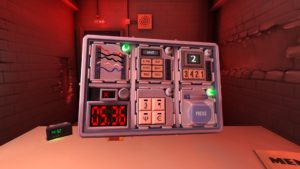 Don’t let the simple premise of Keep Talking fool you, this is a fun and complex game that requires skill and patience. Each round becomes increasingly difficult, beginning with simple wires and escalating to to complex mazes. While difficult, the game is not unfair and once the players learn the technique of the different methods of defusal the fun really begins. Before we go much further, it must be said that this is strictly a multiplayer game. Developer Steel Crate Games meant for this to be a social game so there will be no defusing bombs on your own in this game. The player holding the Switch is the only one that can see the bomb which is displayed in a primitive yet effective setting that consists of an empty room with a table and the bomb. The player then must describe each puzzle to their teammates, the more detail the better. The Bomb Defusal Manual, cleverly available on all devices via the games website, contains small sections on how to solve each puzzle. Finding the clues is no easy task and it gets even more tricky as each clue is a riddle in itself. Each bomb is procedurally generated, meaning you don’t get the same bombs twice, and must be solved before the time expires or the bomb will detonate (in a hilarious animation). The background music is intense adds to the feel of a cinematic bomb defusal experience on par with the latest Mission Impossible movie. 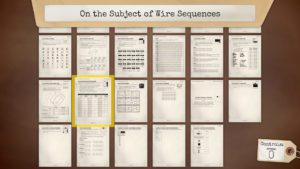 Communication between the Experts and the Bomb Defuser is the key to success and this is where the fun is. Once the brief tutorial teaches you the controls, the Defuser and Experts are on their own. Trying to solve puzzles with friends is a blast and requires a lot of focus in order to complete them before the timer. It may seem difficult at first but after a few rounds you and your friends will have devised your own lingo to help speed things up. This local co-op experience, something that is often quite lacking, is the heart of Keep Talking. While this probably could be played online, it’s best enjoyed with three to five friends all trying to figure out the puzzles together. The fast paced feel has the rounds flying by and the difficulty level is enough to keep players wanting one more try at that next level.

I’m sure there will be updates soon to come and those will hopefully include accessibility on the rumored Nintendo Switch VR. The graphics do leave a lot to the imagination but a shiny bomb isn’t really the point of the game. After years of developers pushing online gaming, it’s great to see a game that reminds us how important it is to play with friends.

Keep Talking and Nobody Explodes is available now on the Nintendo Switch for $14.99. It is also available on Windows (Oculus Rift/HTC Vive optional), macOS, Linux/Steam, Samsung Gear VR, Oculus Go, and Daydream.