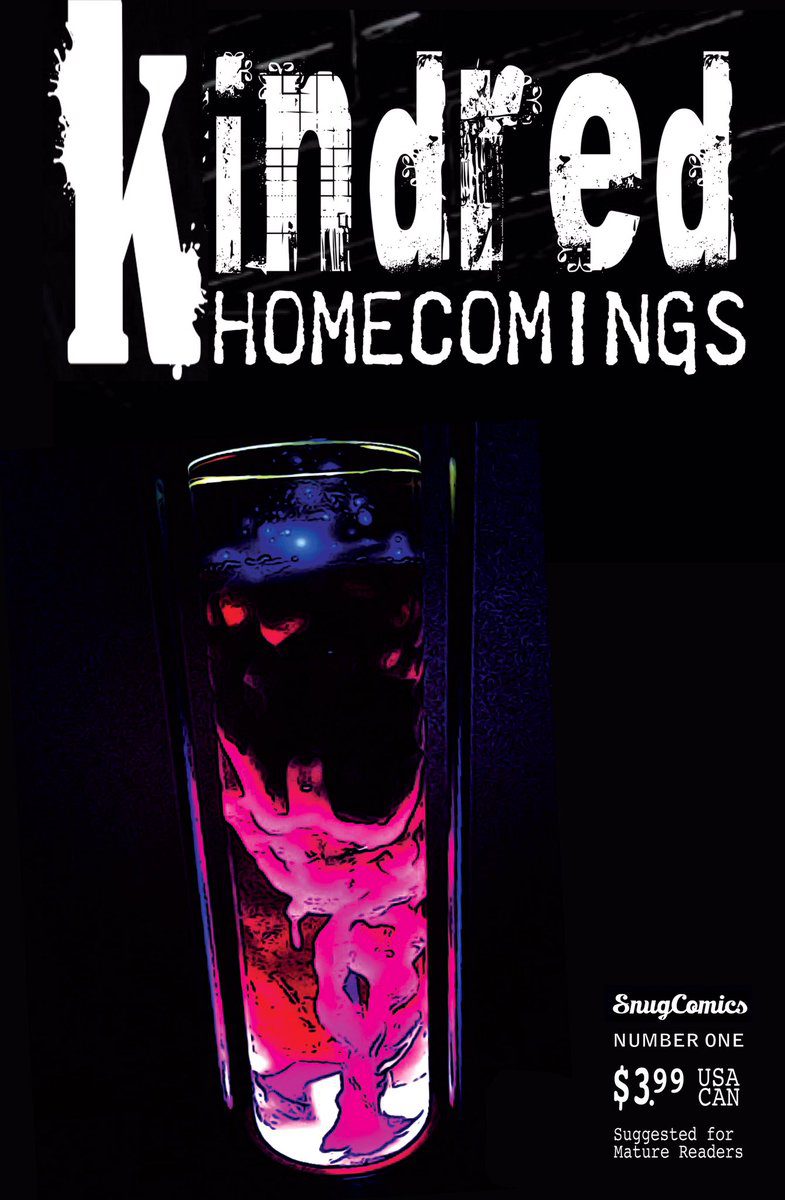 “Some Monsters are Family”

I’ve been such a DC and Marvel snob for so long that I rarely pick up an Indie Comic. This is an odd contradiction. I am, after all, an Indie author.  So I was thrilled to read when the author, Todd Tochioka, sent a copy of Kindred Homecomings to my inbox.

To begin, the artwork caught my eye in the opening panels. The sprawling, rustic, scenery reminded me of landscape photography and the realism drew me into the story. I also felt right at home. I’m a native Alabamian and I live along the Tennessee River. The waves in the first panels crashing against the rocky shoals were a familiar sight. My eyes were drawn to the intricacy weaved into the sedimentary landscape. The rickety old rafters on the second page looked just like an abandoned train bridge I’ve visited many times in my hometown.

I was drawn into the story-line by the dialogue in the first few panels. I immediately felt an ominous feeling, as Sheriff Claire (@MorningNeurosis) answered a phone call. We learned the town’s newest resident, Jane Borchardt (Jamie Bernadette) has already found some trouble in her recently acquired property on Rocky Bluff Drive.

Tochioka did a great job of mixing words with images to immediately bring me into the story. This is a difficult balance in a medium that is based on both text and pictures but is precisely why I love comics. I also felt a foreboding sense of danger in the first panels when Jane called the sheriff. 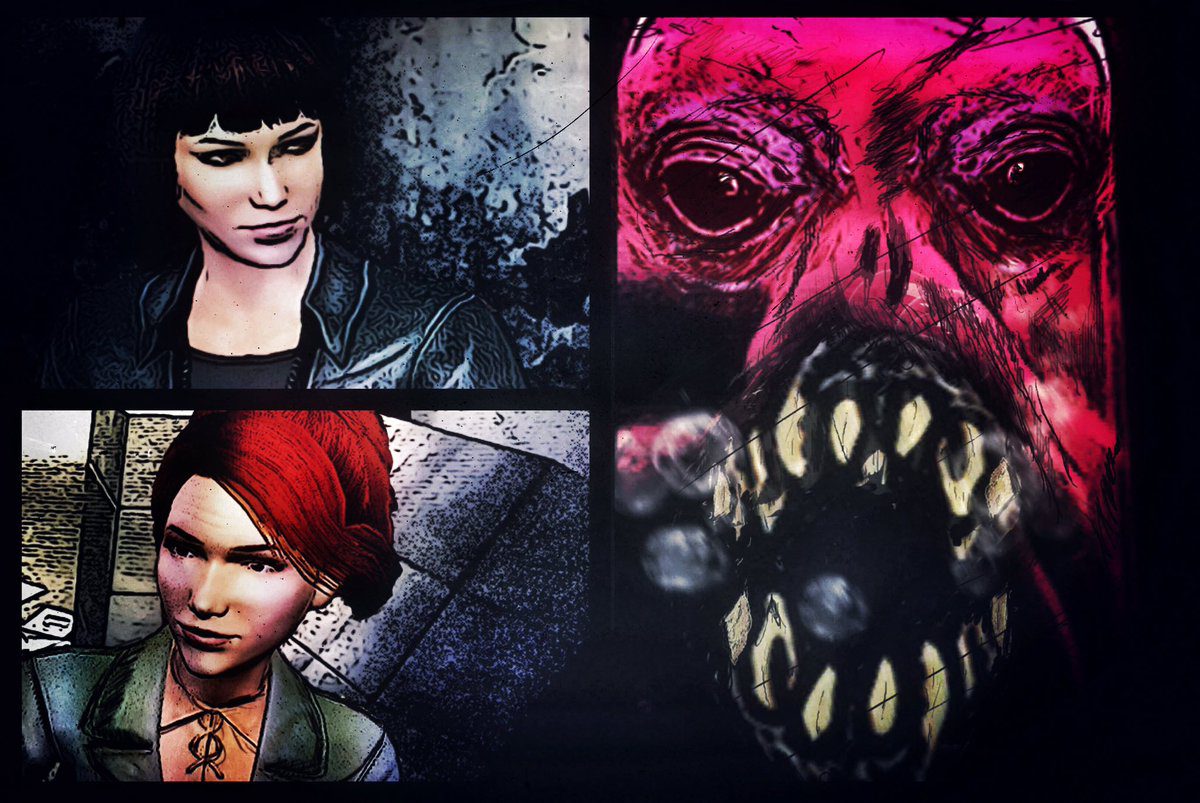 Jane’s dialogue aided in this as well:

“Ironic. That the first house I’ll ever own–is the LAST PLACE I’d want to come home to.”

Sheriff Malinda Claire and Jane went on to explore the new house. The ginger-spitfire Claire, based off podcast host and friend Juliette Miranda of Morning Neurosis, travel far from the beaten path to explore a strange series of noises that has been keeping Jane up and uneasy at night.

The unease only intensified as the two heroines traveled through an old bunker infested with arachnids. I loved the panels where Jane recalled her old feelings about crows on telephone poles. When I was young my mother told me that birds on phone lines had gathered for a meeting. 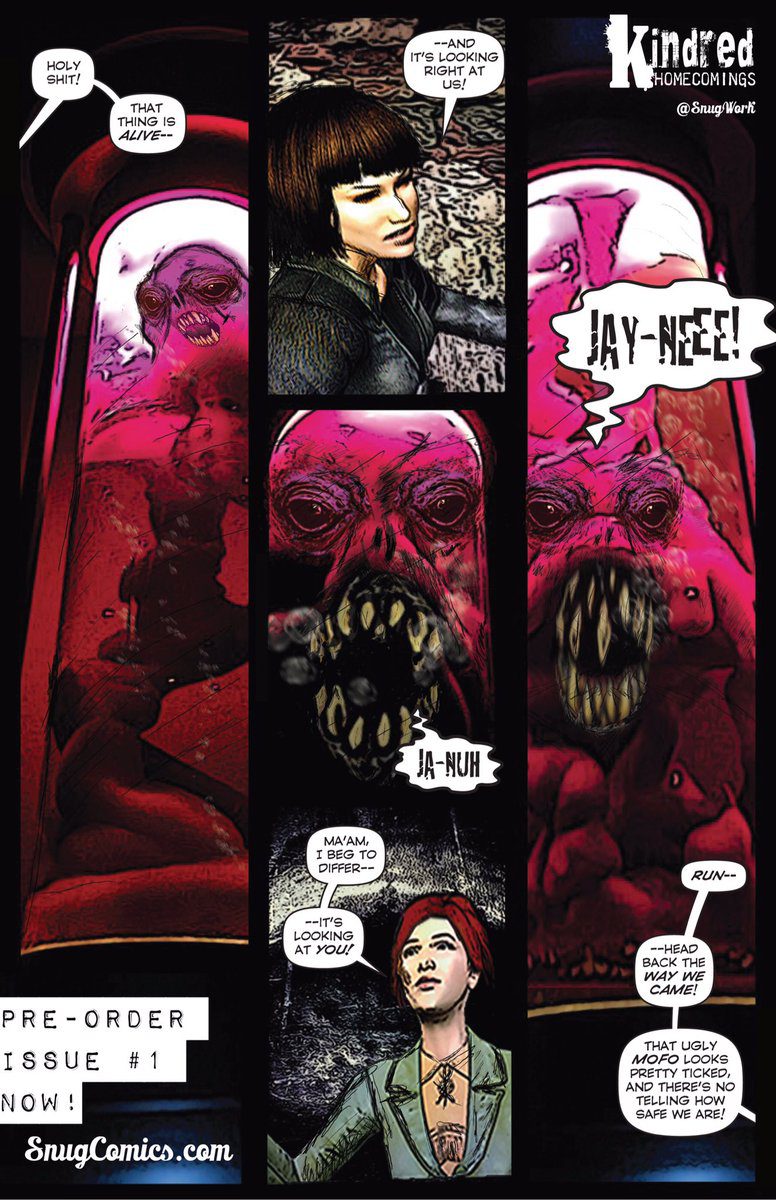 Jane’s idea of the dark birds was far less nostalgic. I saw some signs of deep anxiety when she remembered that she once believed the birds were talking about her.

She said, “The surroundings would go silent, the air thick with some weird tension that words can’t really describe. Suddenly all the crows would take off and this wave of terror would hit me.”

Jane went on to recount some of her past family drama. She recalled her parent’s vague arguments over something to do with her dad’s stepbrother. I felt sure that would play a role as the story progresses, but at that moment I was more interested in what they would find in this dank underground tunnel!

Their surprise discovery did not disappoint.

I won’t spoil the Lovecraft-like monstrosity they found in the bunker. I will say it took me completely off-guard, just like it did our heroines. They were both much braver than I would have been in that situation.  (For me, there would have been a dust-cloud where I had been standing and a Jay-sized hole in the wall.) The issue ended on a cliffhanger after the disgusting source of Jane’s disturbances were discovered. I wanted to know more about this encased discovery: it’s origins, genetic makeup, and how it knew Jane’s name.

What was even more interesting, however, is that both characters were clearly hiding something from their pasts related to the dilapidated contents of the bunker. Sheriff Claire even risked her life and stayed behind to search through some old files labeled “Wortenbaum”.

What the hell is a Wortenbaum? What is this “overgrown sea monkey” inside the contents of a glass vat? And where can I find “Jaded David” on iTunes?! I look forward to finding out the answers, but I expect I’ll find more questions in the next issue!

For more information on Kindred Homecomings, Check Out: SnugComics.com

My BOOK: Outbreak Mutiny is available NOW on Amazon!