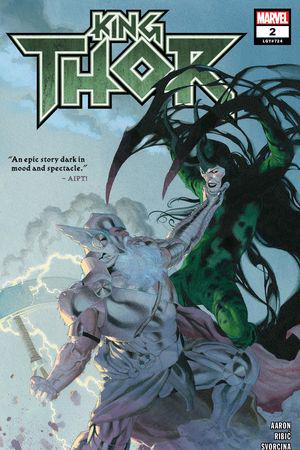 At the end of all things, Thor has one last battle to fight and Gorr will finally complete his mission.

The God Butcher finally has the sons of Odin where he wants them and his mission to kill the last gods is seemingly complete. Unfortunately for Gorr, Thor will not go down so easily. Even with Loki’s betrayal, Thor is determined to free his brother and have the two of them fight Gorr together.

At the same time, The Girls of Thunder continue their quest. One that could bring an answer to a dying universe. With the battle raging against Thor and Gorr, Loki sees the world his brother created and goes off to fight the God Butcher, but not for the reasons one might think.

Jason Aaron fills this issue with huge concepts, universe shattering action and real menace in the form of Gorr. Through the dialogue, Gorr is made into a creature of evil that somehow rises above the very concept of it. The conflict between the two characters is epic both in scale and ideology. It’s interesting to see how the conflict plays out and the reveal from Loki only adds fuel to the fire. There is a lot going on in this issue and Aaron does a great job of keeping the story tight, concise and entertaining.

Esad Ribic’s beautiful artwork throughout the issue is another factor in why this series and this issue are so interesting.