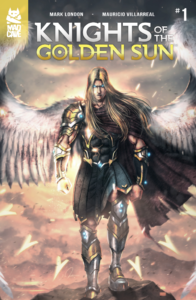 Knights of the Golden Sun is an all-new mythology based comic book created by Mark London. What if there was more to fate than we knew? What if our fate was completely out of our hands? What if it was up to the angels to determine our fate? Four hundred years separate the Old Testament from the New Testament, during that time, neither man nor angel could hear God’s divine message. In His absence, an age of chaos began. With humanity at the wayside, a power struggle erupts among the Archangels over who will control Father’s throne.

For me this book is beautifully drawn and very well written. I love the twist on a very familiar tale and I’m looking forward to the next issue in the series. See our video review below for more details.

Recently Mad Cave Studios has announced a new partnership deal with Diamond Comic Distributors, Inc. Regarding this new venture, Mad Cave CEO/COO Mark London says, “We are beyond excited to be working with Diamond as we bring our comics to the direct market. We look forward to having retailers and readers alike discover the Mad Cave experience…”